Public schools closed and Hawaiians were warned to stock up on food and water as Hurricane Flossie roared toward the state early Tuesday, and a 5.3 magnitude earthquake jolted the Big Island of Hawaii overnight. The eye of the Category 3 storm, with maximum winds of 115 mph, was expected to pass less than 100 miles from the islands and bring strong winds and heavy rain.

· As this storm now barrels down on the Island of Hawaii, pray for the safety of all of its residents, and for strength and wisdom for all emergency services personnel who will have to deal with this imminent crisis both during the storm and in the days ahead. Amen.

Karl Rove, credited with masterminding the rise of George W. Bush to the Texas governorship and then to the White House, announced yesterday that he will resign effective at the end of this month. Mr. Rove said he would not play "any formal role in the presidential election" of 2008, but indicated he would not disappear, either.

· Lift up President Bush in prayer, as he prepares to part ways with his longtime adviser and very close friend, Karl Rove. Begin praying now that President Bush will know the Lord's will as he chooses the next person to fill this position on the White House staff. May this be a man or a woman who understands the Lord's heart for Israel!!

Frequent tours for U.S. forces in Iraq and Afghanistan have stressed the all-volunteer force and made it worth considering a return to a military draft, President Bush's new war adviser said Friday.

The Pentagon sharply rejected Monday a key general's assertion that a return to the military draft has always been "an option on the table" and should be considered.

· Pray that advisors who are going to be making serious decisions concerning our troops will have God's wisdom on what is good for the nation as well as for the troops.

· "Blessed is the man whom You instruct, O Lord, and teach out of Your law, that You may give him rest from the days of adversity, until the pit is dug for the wicked. " (Psalms 94:12, 13)

4. US doles out millions for street cameras - Boston Globe The Department of Homeland Security is funneling millions of dollars to local governments nationwide for purchasing high-tech video camera networks, accelerating the rise of a "surveillance society" in which the sense of freedom that stems from being anonymous in public will be lost, privacy rights advocates warn.

· Lord, we pray that any type of surveillance in our cities that would be used against the citizens that might be seen as opposing the government will never be sanctioned by our government -- as they do in Venezuela or China!

· "You shall not go about as a talebearer among your people; nor shall you take a stand against the life of your neighbor: I am the Lord." (Leviticus 19:16)

Responding to credit crunch fears in the stock market, the Federal Reserve of New York said Friday it would buy a total of $38 billion in mortgage-backed, Treasury and agency assets to inject more cash into the banking system. 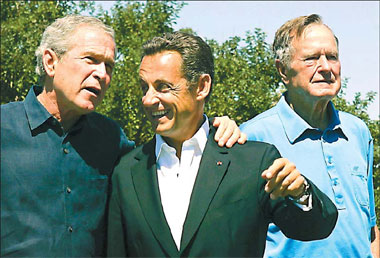 "Mr. Bush called Sarkozy a friend who could be counted on to speak frankly. 'We have had good disagreements - on Iraq, in particular,' Mr. Bush acknowledged about the U.S.-France partnership. 'But I've never allowed disagreements to not find other ways to work together.'

· Offer praise that France and America, under the leadership of President Sarkozy and President Bush, have now opened a new era of dialogue for the days ahead. United, we stand. 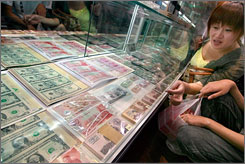 China sought Sunday to dampen speculation it will conduct a massive sell-off of U.S. dollar holdings, with a central bank official saying the dollar remains a mainstay of its foreign exchange reserves.

· "Therefore hear me now, my children, and do not depart from the words of My mouth. Lest you give your honor to others, and your years to the cruel one; lest aliens be filled with your wealth, and your labors go to the house of a foreigner." (Proverbs 5:7, 9)

World oil prices are headed for $100 per barrel, Venezuelan President Hugo Chavez predicted on Saturday, and said he will cut supplies to the United States if the U.S. government "attacks" the South American nation again.

· The actions of Venezuela's President Hugo Chavez bear continual watching, for he is an avowed enemy of our nation. Come against any plots or schemes he has designed that would serve to weaken our economy, and pray for the salvation of Hugo Chavez.

· "Devise your strategy, but it will be thwarted; propose your plan, but it will not stand, for God is with us." (Is. 8:10)
Posted by Capitol Hill Prayer Partners at 10:02 PM