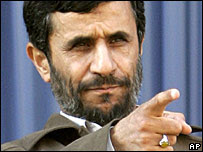 UNITED NATIONS - Iranian President Mahmoud Ahmadinejad canceled a trip to New York to address the U.N. Security Council before it votes Saturday to impose further sanctions against his country for refusing to stop enriching uranium, an Iranian Foreign Ministry spokesman said. After intense last-minute negotiations, the six world powers that drafted the resolution overcame concerns from several council members Friday and expected it to be approved unanimously when it comes to a vote, said French Ambassador Jean-Marc de La Sabliere.

In a vote of 218 to 212 with one member voting present, the House Friday passed a bill authorizing more funding for military operations in Iraq and Afghanistan, but the bill also sets a September 2008 deadline for withdrawing troops. President Bush has promised to veto the bill if it gets to his desk and accused the Democrats of trying to score political points with the bill. He said the vote only does one thing - it "delays the delivery of vital resources for our troops."

In a 52 to 47 vote, the Senate Friday approved a $2.9 trillion 2008 fiscal budget that raises the federal tobacco tax and gives preference to middle class tax breaks in the event of any future surpluses. Before this vote, Senate Republicans charged that, if the 2008 budget proposals introduced by Senate Democrats last week are enacted, passing any future tax relief measures would be nearly impossible.

• Pray for the Senators to have a heart to seek God. Pray for righteous votes that lead to the prosperity of the Lord. For the benefit of future decisions and needs, pray for this tax proposal to be stopped. Pray for sound judgement and godly guidance. • "If thou wouldest seek unto God betimes, and make thy supplication to the Almighty; If thou wert pure and upright; surely now he would awake for thee, and make the habitation of thy righteousness prosperous." (Job 8:5-6) "I will instruct thee and teach thee in the way which thou shalt go; I will guide thee with mine eye." (Ps.32:8)

Software filters work much better than a 1998 federal law designed to keep pornography away from children on the Internet, a federal judge ruled Thursday in striking down the measure on free-speech grounds.

• Repent of decisions toward evil that would not protect children from such deep darkness. Pray for revealation of true freedom to act responsibly for the good of all. • "And I will bring the blind by a way that they knew not; I will lead them in paths that they have not known: I will make darkness light before them, and crooked things straight. These things will I do unto them, and not forsake them." (Is. 42:16)

5. Cancer Is Back But Campaign Continues, Edwards Says - CNSNews.com

Democratic presidential candidate and former North Carolina Sen. John Edwards announced Thursday that his wife Elizabeth's cancer has returned, but dismissed speculation that he was withdrawing from the campaign. Mrs. Edwards, who was diagnosed with breast cancer in 2004, was in remission. However, when she went to the hospital for treatment for a cracked rib this week, doctors discovered that the cancer was back - and this time, while it is treatable, it is incurable. "The thing that is true is that her cancer will not be cured now. Elizabeth will have this as long as she's alive," Edwards said. He said they are very optimistic, given the "relatively minimal presence of cancer in other places" and because of "the relatively small size of the tumor." He said they were informed that "many patients in similar circumstances have lived many years."

• Pray for a miracle of divine intervention and healing for Elizabeth Edwards. As Senator Edwards continues his campaign, pray that he be given wisdom to know when he must be with his wife, and when he can be on the campaign trail. • "By His stripes, ye were healed." (Isaiah 54:17)

Posted by Capitol Hill Prayer Partners at 1:25 AM