"These commandments that I give you today are to be upon your hearts. Impress them on your children. Talk about them when you sit at home and when you walk along the road, when you lie down and when you get up." (Deuteronomy 6:6-7) According to reports in the Israeli media today, an agreement has been reached with the Palestinian Hamas party over the number of security prisoners Israel will release in return for kidnapped IDF soldier Gilad Shalit - who has been held by Hamas in Gaza since last summer - and the exchange could take place in coming weeks.

Breaking months of relative political silence, opposition leader and Likud chairman Binyamin Netanyahu on Wednesday declared that the time has come for new elections in Israel.

The Israeli air force unveiled its newest unmanned aircraft Wednesday, saying the plane can fly longer, faster and higher than any other surveillance aircraft.

A deadly bacterium known as Klebsiella pneumoniae is believed to have killed some 120-200 patients in hospitals across the country. 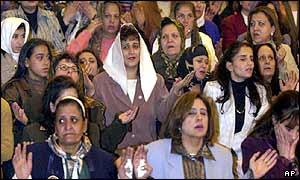 Egyptian authorities have forbidden some 2,000 Egyptian Coptic and Greek Orthodox Christians from making a pilgrimage to the Church of the Holy Sepulcher in Jerusalem for Easter services. Egyptian travel companies have notified Israeli tourist offices. The decision follows heated controversy over the arrest of Mohammed Essam Ghoneim el-Attar who is standing trial in Egypt for allegedly spying for Israel. Even though the Egyptian pilgrims pre-paid for their reservations, Jerusalem hotels are refusing to refund them, claiming they rejected hundreds of other potential guests to make room for them.
Posted by Capitol Hill Prayer Partners at 1:24 AM