The Russian state-run company building Iran's first atomic power plant said Monday that Tehran has made its first payment toward the long-delayed construction of Bushehr plant since a dispute over financing halted construction.

UK officials said that if the personnel are not returned in the next few days, Britain will go public with what it says are proofs they were in Iraqi waters when apprehended by the Iranians, rather than, as charged by Tehran, in Iranian territory.

The presidents of Russia and China on Monday called on Iran to fulfill the U.N. Security Council’s demands over its disputed nuclear program -- a sign of impatience from Iran’s two closest allies over its continued defiance. 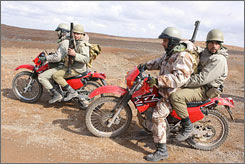 The Bush administration is using the nuclear standoff with Iran to target the Iranian Revolutionary Guards, accused by the United States of backing extremists in the Middle East, carrying out terror attacks and arming Iraqi militia groups.