• Lord, we pray that the focus of all of these hearings would be on correcting these problems rather than recriminations over this issue. We ask You to bless our soldiers and their families in their physically, financially, and every possible way for the great sacrifices each one has made in serving our country. • "Greater love has no one than this, that he lay down his life for his friends." (John 15:13) (NIV)

2. Alliance for Marriage to Focus on States - CitizenLink

The group that drafted the original federal marriage amendment will now turn its attention to state legislatures. The Alliance for Marriage (AFM) announced last week it's forming a marriage-protection caucus of state lawmakers for the "50-state strategy." "We have to turn our attention to the states in light of what happened in the last election," AFM President Matt Daniels told CitizenLink. "We are building a new and unique national network of legislators in both parties who share a desire to see marriage protected under our laws."

• Lord, please bring us back to be a Christian nation. We pray that our entire nation once again goes towards Christianity so that we can truly be a Christian nation with Your idea of what a family should be – one man and one woman! • "But since there is so much immorality, each man should have his own wife, and each woman her own husband." (1 Corinthians 7:2)

A top U.S. diplomat meets his North Korean counterpart in New York on Monday, and the U.S. this weekend is scheduled to take part in a meeting over Iraq that will include Iran and Syria.

• Ask our Lord to grant wisdom to members of the Bush Administration as they begin to reach out to former enemies in order to forge the way to peace. Pray they not be deceived by any hidden agendas in these negotiations. • "Get wisdom, get understanding; do not forget my words or swerve from them. Do not forsake wisdom, and she will protect you; love her, and she will watch over you." (Proverbs 4:5,6)

Momentum is shifting away from scientific theories bolstering human-centered models of global warming and toward skeptics who do not see a link between human activity and rising temperatures, Sen. James Inhofe (R-Okla.) told the annual Conservative Political Action Conference.

• Offer a chorus of praise that more and more of our leaders are beginning to question the "science" behind the global warming debate. Continue to ask that our Lord grant clarity in this "fog of deception" for all those leaders in our nation who are tasked with writing laws to safeguard our environment. • "O Timothy, keep that which is committed to thy trust, avoiding profane and vain babblings, and oppositions of science falsely so called . . ." (1 Timothy 6:20)

The highlight of President Bush's visit to Brazil on Thursday is expected to be a new ethanol "alliance" he will forge with Brazilian President Luiz Inacio Lula da Silva. The deal is still being negotiated, but the two leaders are expected to sign an accord Friday to develop standards to help turn ethanol into an internationally traded commodity, and to promote sugar cane-based ethanol production in Central America and the Caribbean to meet rising international demand.

• Pray for the safety of President Bush as he kicks off his Latin American tour on Thursday. • "I guide you in the way of wisdom and lead you along straight paths. When you walk, your steps will not be hampered; when you run, you will not stumble." (Proverbs 4:11, 12) 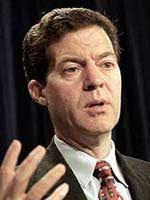 Presidential candidate Sen. Sam Brownback embraces conservative social issues — he is strongly anti-abortion. But the Kansas Republican also talks about subjects dear to liberals, like stopping the killing of refugees in Darfur.

• Even though our next presidential election is yet over 18 months away, all the candidates for 2008 are now being closely examined, in both parties. Offer praise for this nonbiased report about Senator Brownback's positions, and ask that all reports for all candidates reflect similar objectivity. All issues -- including those of immigration policy and supporting the president's current position on Iraq -- need to be examined, "fair and square." • "You shall know the truth, and the truth shall set you free." (John 8:32)

China will boost military spending by 17.8 percent this year, a spokesman for the national legislature said Sunday, continuing more than a decade of double- digit annual increases that have raised concerns among the United States and China's neighbors.

• Pray that the gospel of Jesus Christ will be spread quickly and greatly in China so that China can be delivered of its wicked ways. Pray for America to be wise in all its dealings with foreign nations! • "You have not strengthened the weak or healed the sick or bound up the injured. You have not brought back the strays or searched for the lost. You have ruled them harshly and brutally." (Ezekiel 34:4)