As President Bush stressed the historical partnership between the United States and Mexico on issues of mutual concern, he also repeated a vow made often during his week-long Latin American trip that he will seek a comprehensive immigration bill from Congress that provides more opportunities for temporary foreign workers. "We're working to ensure that we have a secure and modern border that speeds the legitimate flow of people and commerce," Bush said. "The United States respects the rule of law. But in the debate on migration, I remind my fellow citizens that family values do not stop at the Rio Grande River."

• Dear Lord, we thank You for the safe return of President Bush to the White House late today. May many immigration issues, including those that could be terrorism related, be resolved for Your Glory and for America's and the world's safety! • "The firstborn of the poor will feed, and the needy will lie down in safety." (Isaiah 14:30a, NKJV)


2. Attorney General Gonzales: I Acknowledge Mistakes Were Made In Firing Of U.S. Attorneys - Fox News 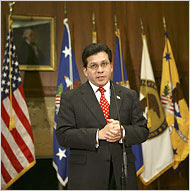 Attorney General Alberto Gonzales on Tuesday acknowledged that mistakes were made in the firing of top U.S. attorneys and took responsibility following calls for his resignation -- but said he did not plan to resign. Top Democrats, led by Sen. Charles Shumer, D-NY, are upset over the firings of eight U.S. attorneys announced last December. They believe some of those fired were pressured by leading Republicans to speed up investigations of potential voter fraud involving Democrats. Gonzales' chief of staff Kyle Sampson was forced to resign, however, apparently because of the faulty communications with Congress.

• Dear Lord, we know that You know every detail of our lives and what is in our hearts. May this evil outcry to punish AG Gonzales because he is revealing potential voter fraud be stopped for Your glory! • "For the ways of man are before the eyes of the Lord, and He ponders all his paths. His own iniquities entrap the wicked man, and he is caught in the cords of his sin." (Proverbs 5: 21-22 NKJV)

Chairman of the Joint Chiefs of Staff, General Peter Pace said Tuesday that "I believe homosexual acts between two individuals are immoral and that we should not condone immoral acts." He also said adultery is immoral. "I do not believe the United States is well served by a policy that says it is OK to be immoral in any way," Pace told the Chicago Tribune newspaper. Rep. Martin Meehan (D-Mass.) recently introduced legislation to reverse the military's ban on homosexual service members. The Military Readiness Enhancement Act died last year in the Republican-controlled Congress. With Democrats in charge, Meehan is more optimistic about passing the bill.

• Please continue to pray for God's glory to be revealed in his son, General Pace, and in his unswerving devotion to Him! May more leaders acknowledge the Lord's Truth found in His Word! • "Have nothing to do with the fruitless deeds of darkness, but rather expose them. For it is shameful even to mention what the disobedient do in secret."(Eph. 5:11,12)

U.S. stocks plunged Tuesday in their second-worst sell-off of the year as the impact of losses in the subprime mortgage group cascaded across the financial sector, knocking down shares of investment banks and traditional lenders. Before Tuesday's sell- off, U.S. stocks had been in a recovery mode following the market's slide two weeks ago, which wiped out index gains for the year and took the S&P 500 to its lowest level in more than four years. The move was part of a global sell-off that started with the biggest drop in China's main stock index in a decade.

• If God owns everything, how can we as Christians, worry about what He has and will give to us? Pray for those who hold money as their god, that they will turn to the only true God for all of their needs! • May we have faith as the prophet Isaiah who prayed this prayer while in deep distress: "He will dwell on high; his place of defense will be the fortress of rocks; bread will be given him, his water will be sure." (Isaiah 33: 16 NKJV)

A debate rages behind the scenes in Washington about the financing and motives of the Council on American - Islamic Relations. Caley Gray, a spokesman for Representative Bill Pascrell Jr., a New Jersey Democrat who helped book the room called . . . to specify that Mr. Pascrell did not endorse all of the group’s positions. Last fall, Senator Barbara Boxer of California issued a routine Certificate of Appreciation to the organization representative in Sacramento, but she quickly revoked it when critics assailed her on the Web under headlines like “Senators for Terror.” “There are things there I don’t want to be associated with,” Ms. Boxer said later of the revocation, explaining that her California office had not vetted the group sufficiently.

• The Word of God is true and does not fail. It is written, "What Satan meant for evil, God has turned to good." Offer praise that the aggressive tactics of CAIR on Capitol Hill this week are beginning to backfire; and that instead, the truth about this group and its mission as a "front" for terrorists is now being examined in public. Praise God, too, that Senator Boxer's staff has done its homework, and that according to this report, the senator has responded accordingly. • "And we know that all things work together for good to those who love God, to those who are the called according to His purpose." (Romans 8:28)

. . . a self-created political fiasco - Global Warming -
For many years now, human-caused climate change has been viewed as a large and urgent problem. In truth, however, the biggest part of the problem is neither environmental nor scientific, but a self-created political fiasco. Consider the simple fact, drawn from the official temperature records of the Climate Research Unit at the University of East Anglia, that for the years 1998-2005 global average temperature did not increase (there was actually a slight decrease, though not at a rate that differs significantly from zero).

• Offer praise that this report has now been issued in England, offering a different perspective on the global warming "crisis." Continue to come against any and all agendas, related to the false claims of climate change, that would result in a one-world, global tax on all nations for alleged "abuses" of our environment. The truth WILL set you free! • "O Timothy, keep that which is committed to thy trust, avoiding profane and vain babblings, and oppositions of science falsely so called . . ." (1 Timothy 6:20)