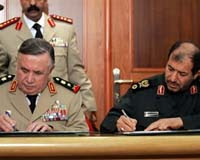 Iran and Syria on Monday signed a new protocol on defense cooperation to promote the defense ties between the two countries, local Fars news agency reported.

Both Iran and Syria said Sunday US forces must withdraw from from Iraq because they are fueling the violence. The conference decided on a follow-up at foreign ministers level next month in Istanbul. Over the weekend, DEBKAfiles military sources reveal American air contingents from the United States and Europe continued to land at US Persian Gulf air bases. Iran responded by placing its air defense units on a war footing and deploying Revolutionary Guards special forces units around its nuclear installations.

The three-way conspiracy to darken the US presidents tour was put together in Tehran Tuesday, March 6, by Iranian leaders, visiting Venezuelan foreign minister Nicolas Maduro Moros and Hamas hard-line leader Khaled Meshaal, who arrived in Iran for the second time in a month. The Venezuelan government and Hamas plan to ceremonially open a Hamas Office in Caracas, licensed to handle the affairs of the substantial and affluent South American Palestinian colonies.