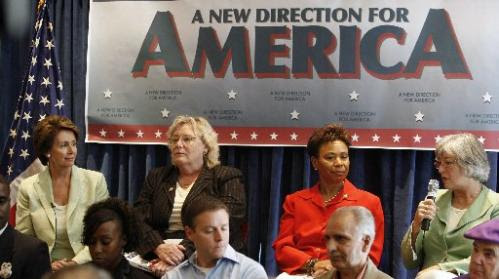 ...
Pelosi, Lofgren, Lee and Woolsey split over the right "new direction" for the war.

One of the Democrats' chief designated vote counters, Rep. Maxine Waters (D-Calif.), is actively working against the Iraq war spending bill. The leadership's senior chief deputy whip, Rep. John Lewis (D-Ga.), spoke passionately against it on the House floor. And one of the whip organization's regional representatives, Rep. Lynn Woolsey (D-Calif.), is implacably opposed. The disarray in the House whipping operation ahead of tomorrow's expected vote on the bill is putting a harsh spotlight on House Majority Whip James E. Clyburn (D-S.C.), who has the task of rounding up the 218 votes needed to pass the $124 billion measure, but who has not even kept his organization in line. "There's only one test, and that will be whether we get 218 on the board on Thursday," said House Democratic Caucus Chairman Rahm Emanuel (D-Ill.), who predicted that Clyburn will come through with the votes.

2. Democrats 0 for 6 in Congress- Washington Times None of the elements of the newly minted Democrats' congressional agenda have made it to President Bush's desk, and the prospects of signature bills such as federal funding for stem-cell research or homeland-security improvements becoming law any time soon are doubtful. Much of the Democratic agenda -- dubbed "Six for '06" -- sailed out of the House with bipartisan support, but all of it has stalled in the Senate as leaders scramble to deal with the Iraq war.

Subpoenas for Karl Rove and Harriet Miers could be authorized as early as Wednesday as congressional Democrats and President Bush brace for battle over the extent to which White House aides should respond to scrutiny over the firing of eight former U.S. attorneys. In calling for the subpoenas, Democrats are rejecting an offer made by President Bush late Tuesday to allow former counsel Harriet Miers and his top political adviser Karl Rove — as well as deputy White House counselors William Kelley and J. Scott Jennings and Rove deputy Sara Taylor — to speak to judiciary panel members and staff. The president insisted that the consultations be given privately and not under oath.

• Cast down the spirits of contention and striving that have erupted around this matter, and call forth the spirit of humility, that each side might serve the other in truth. God WILL make these crooked paths to be straight, as we pray for ALL in authority. • "God resists the proud, But gives grace to the humble." (James 4:6a) 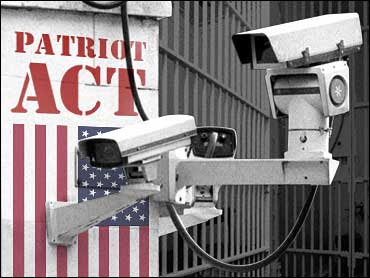 Republicans and Democrats sternly warned the FBI on Tuesday that it could lose its broad power to collect telephone, e-mail and financial records to hunt terrorists after revelations of widespread abuses of the authority detailed in a recent internal investigation. Their threats came as the Justice Department's chief watchdog, Glenn A. Fine, told the House Judiciary Committee that the FBI engaged in widespread and serious misuse of its authority in illegally collecting the information from Americans and foreigners through so-called national security letters. If the FBI doesn't move swiftly to correct the mistakes and problems revealed last week in Fine's 130-page report, "you probably won't have NSL authority," said Rep. Dan Lungren, R-Calif., a supporter of the power, referring to the data requests by their initials.

• "Righteousness and justice are the foundation of Your throne." (Psalm 89:14)

..Planet Has a Fever'
Al Gore testifies before Congress that time is running out to curb global warming

Former Vice President Al Gore apparently will brook no skepticism. Given the opportunity to testify about global warming before the House Energy and Commerce Committee on Wednesday, Gore decided to arrive late, so he wouldn't have to suffer through the Republicans' opening statement.

• "The wicked flee when no one pursues; but the righteous are as bold as a lion." (Proverbs 28:1)

6. Senate Okays Bill to Preserve 'Independence' of US Attorneys - CNSNews.com

The Senate on Tuesday voted 94-2 to pass a bill designed to "preserve the independence" of U.S. attorneys by barring the attorney general from appointing U.S. attorneys to serve for indefinite periods without Senate confirmation.