Against the advice of the president, a House panel Wednesday approved the issuing of subpoenas for President Bush's top aides, including presidential adviser Karl Rove, despite Bush's earlier offer to allow them to discuss - in private and not under oath - the dismissal of eight U.S. attorneys. White House officials warned Wednesday that if congressional committees actually issue subpoenas, their offer to permit private interviews will be withdrawn. . .

• Lord we take authority over the spirits of anger and suspicion that lie within our government at this time, and bind their working in both Congress and the White House. We humbly ask Your forgiveness for the disunity in our nation, and pray that Your peace will come to Capitol Hill. May You guard the Presidential powers from interference, and may truth triumph over suspicion. • "He has redeemed my soul in peace from the battle which was against me. . ." (Psalm 55:18)

As the House prepares to debate legislation Thursday that would authorize more funding for military operations in Iraq and Afghanistan - and set a September 2008 end- date for funding - conservative analysts condemned what they said was excessive "pork spending" in the bill. The U.S. Troop Readiness, Veteran's Health, and Iraq Accountability Act would allocate $103 billion in additional funding for military operations, and to care for wounded troops. But it also contains $21 billion in so-called "pork spending." Rep. Joe Pitts (R-Pa.) said in a statement Wednesday that Democrats are "trying to pressure reluctant members into voting for this by taking on billions of dollars in pork barrel projects. The money they want to spend on spinach subsidies and peanut storage would be better spent on body armor and Humvees."

• Father we ask that You bring conviction to our legislators, and return their hearts to the people of America and our troops. We ask the wind of Your Spirit to remove partisan politics from important issues, and cause legislators to see the issues with Your eyes of truth. • "Draw near to God and He will draw near to you. Cleanse your hands, you sinners, and purify your hearts, you double-minded. Humble yourselves in the sight of the Lord, and He will lift you up." (James 4:8-10)

Liberals call it a "hate crimes prevention" bill, but conservatives denounce it as "anti-Christian" legislation. Whatever you call it, the bill is back -- reintroduced by Rep. John Conyers (D-Mich.) on Tuesday. Liberals are pressing for passage, and conservatives are pressing President Bush to veto the bill if it reaches his desk. "If there was ever a bill which needed to be vetoed -- this is it," said Traditional Values Coalition Executive Director Andrea Lafferty. "Most Christians might as well rip the pages which condemn homosexuality right out of their Bibles because this bill will make it illegal to publicly express the dictates of their religious beliefs."

• Lord we bind the plans of the enemy to destroy freedom of speech, and put Your people in bondage. We declare that Jesus Christ is Lord over America, and all plans to keep Christians silent be dissolved. • "No weapon formed against you shall prosper, and every tongue which rises against you in judgment you shall condemn." (Isaiah 54:17)

The U.S. Coast Guard announced the record- breaking seizure of twenty tons of cocaine or 42,845 pounds in a ship off the Pacific coast, most likely headed to a port in Mexico.

• We bless You, Father, for this arrest! May Your power reign supreme against the drug trafficking along our borders. • "The righteous cry out, and the Lord hears, and delivers them out of all their troubles." (Psalm 34:17) 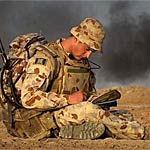 Howard insisted he would not bow to pressure to pull out Australian troops from the spiraling conflict, saying the US plan to restore peace must be given time to work as the stability of the region was at stake. "What Iraq and her people need now is time, not a timetable. They seek our patience, not political positioning. They require our resolve, not our retreat," he told the Australian Strategic Policy Institute.

• Father we thank You for the resolve of Prime Minister Howard, and ask that Your favor and protection would surround him. As he has stood with President Bush, would you stand with him at this hour of extreme pressure. • "But You, O Lord, are a shield for me, my glory and the One who lifts up my head." (Psalm 2:3)

6. Experts Warn Terrorists Could Launch Nuclear Attack on US - Voice of America

A group of nuclear weapons specialists has issued ominous warnings before members of the U.S. Congress that terrorist groups like al-Qaida could launch a massive attack on the United States and currently there is little to deter or defend against such a strike. Sidney Drell, an arms control specialist and physicist at Stanford University, told members of the Senate Armed Services Committee the United States has entered, what he calls, a "dangerous time."

• Thank God that He promises to be our Shield, as we walk in obedience to Him. Continue to stand in the gap for our nation; there is much for which we need to offer repentance. • "This know also, that in the last days perilous times shall come." (2 Timothy 3:1)