1. Iran's Top Leader: We Will Pursue Nuclear Activities Regardless of Sanctions - AP

Iran's top leader Ayatollah Ali Khamenei warned on Wednesday that the country will pursue nuclear activities outside international regulations if the U.N. Security Council insists it stop uranium enrichment. "Until today, what we have done has been in accordance with international regulations," Khamenei said. "But if they take illegal actions, we too can take illegal actions and will do so." Khamenei did not elaborate what "illegal actions" could be pursued by Tehran as it faces new sanctions by the U.N. body over its refusal to halt enrichment which the West fears is used for arms making.

2. Bolton: Only Force Will Deter Iran From Nuclear Program - AP

President Bush's former envoy to the United Nations says using military force against Iran would be preferable to allowing the country to acquire nuclear weapons. John Bolton gained a reputation for speaking out during his 17 months as U.S. ambassador to the world body. But his remarks Tuesday night were some of his boldest yet, especially concerning Tehran. 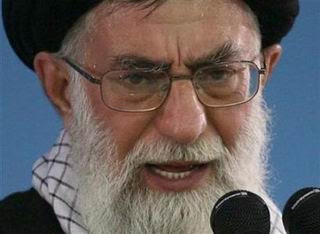 Senior Iranian leaders repeatedly have vowed to target U.S. interests around the world should their country come under attack from the United States or Israel. Accordingly, Tehran is positioning itself to inflict significant pain on the United States and its allies in multiple countries.

Iran's navy started more than a week of war games in the Gulf on Thursday using small vessels carrying missile launchers and tactical submarines, state television reported. The exercises are the latest in a series of maneuvres staged by Iran's military in the Gulf region, where the United States has deployed a second aircraft carrier, a move widely seen as a warning to Tehran over its nuclear ambitions.