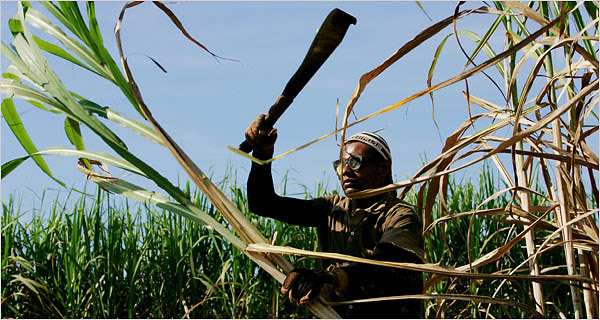 Today, Secretary Of State Condoleezza Rice And Brazilian Foreign Minister Celso Amorim signed a "Memorandum Of Understanding To Advance Cooperation On Biofuels". The agreement highlights the importance of biofuels as a transformative force in the region to diversify energy supplies, bolster economic prosperity, advance sustainable development, and protect the environment.

• As the U.S. continues to explore alternative sources of energy, offer praise for this announcement today. Ask that God's perfect will be done in all matters relating to this agreement. • "Thy Kingdom come, Thy will be done on earth, as it is in heaven." (Matt. 6:10)

Homeland Security officials are testing a supersnoop computer system that sifts through personal information on U.S. citizens to detect possible terrorist attacks, prompting concerns from lawmakers who have called for investigations. A Government Accountability Office (GAO) investigation of the project was requested by Rep. David R. Obey, Wisconsin Democrat and chairman of the House Appropriations Committee. The system uses the same data-mining process that was developed by the Pentagon's Total Information Awareness (TIA) project that was banned by Congress in 2003 because of vast privacy violations.

• Pray for wisdom for the officials at the Department of Homeland Security, to know how to weigh our own rights for privacy against the need to know all facts necessary to locate, arrest and apprehend the terrorists among us. Pray for hidden things to be revealed through this system, and through the angelic help of God. • "If you need wisdom, ask our generous God, and he will give it to you." (James 1:5a NLT)

The United States is stepping up a high-tech effort to combat the labyrinth of tunnels built by Mexican drug cartels that could someday become conduits for terrorists. Along land borders, Homeland Security is setting up new technology under the Secure Border Initiative. The program, which could cost $7.6 billion or more over the next five years, will give border agents new high- definition cameras and sensors that can pick up cross-border traffic. The department also is using unmanned aerial vehicles to nab smugglers.

• Praise God for the development of this "virtual fence" along our southern border! Ask our Lord to dispatch His angels to stand guard over all of this hi-tech equipment, so that it functions effectively and successfully in this aspect of the war on terror. Praise God. • "Praise the Lord, you angels, you mighty ones who carry out his plans, listening for each of his commands. Yes, praise the Lord, you armies of angels who serve him and do his will! Praise the Lord, everything he has created, everything in all his kingdom." (Psalm 103:20,21 NLT)

The House on Wednesday overwhelmingly endorsed federal help for communities faced with deteriorating sewage systems, ignoring White House warnings that the cost was too high. The legislation, approved 367- 58, would spend $1.7 billion over five years in federal grants to states and municipalities to modernize wastewater systems and control sewage overflows that pollute rivers and streams and pose health risks. Those voting against the bill, which now moves to the Senate, were all Republicans.

• Lord, as this bill moves to the Senate, we ask that it be critiqued for reasonable funding. Bring discretion into this bill to balance it with proper funding. Supply the systems of infrastructures that control sewage overflow. We desire the blessings of clean rivers and streams. • "For his God doth instruct him to discretion and doth teach him. This also cometh forth from the Lord of hosts, which is wonderful in counsel, and excellent in working." (Is. 28:26,29) "Discretion shall preserve thee, understanding shall keep thee." (Prov.2:11)

• We ask you, O Lord to watch over our financial laws with wisdom and prudence. We ask for a protection against legislation that will bring harm to our economy through those who are illegally residing in America. • "The law of the wise is a fountain of life, to depart from the snares of death. Good understanding giveth favour: but the way of transgressors is hard." (Prov. 13:14-16)

• Father we take authority over any plans of the enemy to force the United States to adopt any environmental plans that are not of Your choosing. We continually declare that "the earth is the Lord's and the fullness thereof", and that You alone are the One we trust to help us with the environment. (Psalm 24:1)