"All who rage against you will surely be ashamed and disgraced; those who oppose you will be as nothing and perish."
(Isaiah 41:3)

A top Iranian nuclear negotiator urged Russia on Friday to ship nuclear fuel this month for a Russian- built power plant, and promised to increase funding for the project after tense talks at which Russian officials complained of insufficient financing.

U.N. nuclear agency governors on Thursday ratified cuts in technical aid to Iran over concern that Tehran might be trying to build nuclear bombs under cover of a civilian atomic energy program, diplomats said. The move by the 35-nation board of the International Atomic Energy Agency reflected U.N. sanctions passed in December that ban transfers of technology or expertise to Iran that might be of use in producing nuclear fuel. By consensus, the board adopted a decision by the IAEA's Secretariat to freeze or curb 22 of the 55 aid projects, diplomats in the closed session at IAEA headquarters said. 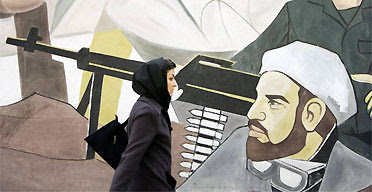 ..A woman walks past a mural on a wall at Palestine Square in Tehran, Iran. Photograph: Morteza Nikoubazl/Reuters
An Iranian ex-deputy defense minister who went missing in what may have been a Western intelligence operation is best known to Israel as the "founder" of Lebanon's Hezbollah, a retired Israeli spy said on Wednesday.

Israel has placed its foreign installations on alert for an Iranian strike. Israeli officials said the Defense Ministry and Foreign Ministry have increased security on embassies and legations throughout the world. They said the government declared an alert after Teheran accused the Jewish state of abducting a senior Iranian official. "The prospect of an Iranian retaliation or provocation exists," an Israeli official said. 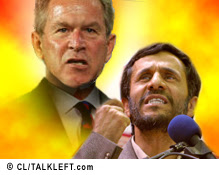 Iran could assemble its first nuclear bomb within six months, a report said. The London-based Oxford Research Group asserted that Iran could launch a crash program to produce its first crude nuclear weapon by late 2007. The ORG report said Teheran could begin such a program should the United States launch air strikes on Iranian nuclear facilities.

Iran will attend a meeting tomorrow in Baghdadm markling the first time in over two years that envoys from the U.S. and Iran will meet in public. Also attending are the five nations of the U.N. Security Council: Britain, France, Russia, China (with the U.S.); as well as Germany. Syria will also be represented along with other member nations of the Arab League.

U.S. participants in this meeting are Zalmay Khalilzad, the U.S. Ambassador to Iraq, and David Satterfield, advisor to Secretary of State Condoleezza Rice.

• Lift up the two U.S. representatives in prayer (Mr. Khalilizad and Mr. Satterfield), asking that they be granted unusual wisdom and discernment as all these deliberations take place in Baghdad. • "Discretion will preserve you; Understanding will keep you." (Prov. 2:11)