"May the words of my mouth and the meditation of my heart be pleasing in Your sight, O LORD, my Rock and my Redeemer." (Psalm 19:14)

At least 4 people were killed today in the northern Gaza Strip and more than 30 injured when a sewage system collapsed, flooding a village with waste water, according to the United Nations agency for Palestinian refugees.

According to a recent poll by An-Najah University, a significant number of Gaza Palestinians, more than two-thirds, believe the Hamas leadership has failed in its role as head of the government, reported Army Radio Monday.

Ban Ki-Moon, the secretary-general of the United Nations yesterday toured a Palestinian refugee camp and spoke of the "very sad and tragic" results of the controversial security wall erected by Israel.

4. Israel, US disagree on new ME approach - Jerusalem Post

Jerusalem's objections to US shuttle diplomacy between Israel and the Palestinians over final-status issues led to the postponement Monday night of a press conference at which US Secretary of State Condoleezza Rice was expected to outline this new initiative, senior diplomatic officials said Monday. 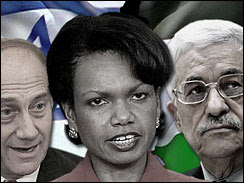 The Israeli and Palestinian leaders have agreed to meet every two weeks to discuss day-to-day issues, but also a "political horizon," US Secretary of State Condoleezza Rice announced Tuesday, after shuttling between the two sides for three days.