U.N. statement calls on Iran to release 15 Brits.
Tehran turns up propaganda war, publishes what it claims is 2nd letter from female sailor 'apologizing' for 'wrongdoing.'

• Only the LORD can defuse this increasingly tense situation, which, if not rectified, may soon lead to armed conflict. Cry out to Him in intercession; He knows how to touch men's hearts, bringing calmer nerves again. Ask our Lord to pour out His oil over troubled waters . . . selah. • "Now when they came to Marah, they could not drink the waters of Marah, for they were bitter. Therefore the name of it was called Marah. And the people complained against Moses, saying, “What shall we drink?” So he cried out to the LORD, and the LORD showed him a tree. When he cast it into the waters, the waters were made sweet." (Exodus 15:23-25)

Bush promises veto over pullout
March 28: President Bush has escalated the standoff with Democrats in Congress over the war, arguing they will have to live with the consequences of any pullout deadlines. NBC's David Gregory reports.

President Bush said Wednesday that efforts by congressional Democrats to issue a rebuke of his Iraq policies are nothing more than meddling in military strategy that would have disastrous consequences for Iraq's democracy and America's security.

• Lord You alone can bring about unity in our government by the moving of Your Spirit. We have failed to bring about cohesion in our leadership, and we ask Your forgiveness for the resulting divisions. Lord we, as Your people, humbly ask that You intervene on behalf of our nation and the nation of Iraq to bring about Your perfect will in the earth. • "If My people who are called by My name will humble themselves and pray an d seek My face, and turn from their wicked ways, then I will hear from heaven, and will forgive their sin and heal their land." (2 Chronicle 7:14)

3. Media accused of showing double-standard in coverage of attorney firings - One News Now

A conservative media watchdog group says the liberal news media is once again showcasing a clear double-standard in its coverage of the controversial firings of eight U.S. attorneys by the Bush administration.

• Father we take authority over the news media and declare Your Lordship over them. We pray that any double-standards be removed, and true objectivity be restored. We speak truth to their minds and hearts and release the power of the Holy Spirit to change the methods and motives of the hearts. • "I will return again to My place till they acknowledge their offense. Then they will seek My face; in their affliction they will earnestly seek Me." (Hosea 5:15) 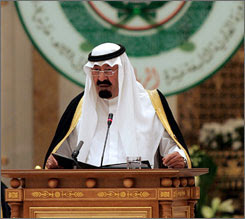 King Abdullah denounced the American military presence in Iraq as an "illegitimate foreign occupation" and called on the West to end its financial embargo against the Palestinians.

• Lord we bind the double-mindedness of Saudia Arabia in their relationship to the US. We ask that You reveal truth to them, and that the wind of Your Holy Spirit will move in that country as well as its leadership for the glory of Your Son Jesus. • "Purify your hearts, you double-minded. . ." (James 4:8)

U.S. Ambassador Ryan Crocker was sworn in as the new top U.S. envoy to Iraq on Thursday, saying that he was taking over the 'most critical foreign policy mission' facing his country. One of the State Department's most experienced Middle East hands, Mr. Crocker, 57, has already served as ambassador to Kuwait, Syria, Lebanon and Pakistan, with postings as well to Iran, Qatar, Egypt and Afghanistan.

• Lord we ask Your power and protection over Mr. Crocker as he steps into this position. We pray for prophetic insight into the affairs of Iraq, that Mr. Crocker would be able to provide exceptional leadership towards stability for that nation. • ". . . gifted in all wisdom, possessing knowledge and quick to understand, who had ability to serve in the king's palace . . ." (Daniel 1:4) 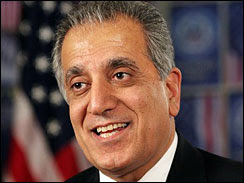 A Senate panel on Wednesday approved Washington's outgoing ambassador to Iraq, Zalmay Khalilzad, to be the new US envoy to the United Nations. By a voice vote, the Senate Foreign Relations Committee approved Khalilzad's nomination, which now goes to the full Senate for consideration.

• Lord God, Mighty One of Israel, as this nomination is now weighed before the entire United States Senate, we ask for a miracle: we ask that You would move to block Mr. Kahlilizad from serving in this post. Let a man instead be found who worships YOU, and who thus represents our nation at the "gate of the nations" IN TRUTH, for we ARE "one nation under God" -- the God of Abraham, Isaac, and Jacob, and none other. We ask for a miracle, Lord. In JESUS' name, amen. • “Sing to the LORD, For He has triumphed gloriously! The horse and its rider He has thrown into the sea!” (Exodus 15:20b)

Posted by Capitol Hill Prayer Partners at 1:12 AM