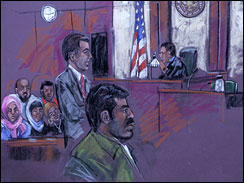 Six foreign-born Muslims were arrested and accused Tuesday of plotting to attack Fort Dix and slaughter scores of U.S. soldiers - a scheme the FBI says was foiled when the men asked a store clerk to copy a video of them firing assault weapons and screaming about jihad.

The six, all men in their 20s from the former Yugoslavia and the Middle East, were arrested Monday night trying to buy AK-47 assault weapons, M- 16s and other weapons from an FBI informant, authorities said. Their goal was "to kill as many American soldiers as possible" with mortars, rocket- propelled grenades and guns, prosecutors said. In addition to plotting the attack on Fort Dix, the defendants spoke of assaulting a Navy installation in Philadelphia during the annual Army-Navy football game and conducting surveillance at other military installations in the region.

· Gracious Lord, we thank you for thwarting this attack against our brave military! Thank You for the wisdom You imparted to those who brought these six to justice, and may all involved understand that it is You who prevented these attacks! · "Therefore take up the whole armor of God, that you may be able to withstand in the evil day, and having done all, to stand." (Ephesians 6: 11 NKJV)

U. S. Secretary of State Condoleezza Rice kicked off an unprecedented meeting of Pacific leaders here Monday by warning against the danger of island 'strongmen' undermining democracy in their vast region. Rice lashed out in particular at the military in Fiji, which toppled an elected government in December and has appeared to back away from a promised timetable for a return to democratic rule. 'The Pacific cannot evolve into an area where strongmen unilaterally decide the fates of their countries and destabilize the democratic foundations of their neighbors.' Rice said.

Rice was addressing the opening session of the first meeting in Washington of the triennial Pacific Islands Conference, a grouping of 12 Pacific states and eight territories, including the US State of Hawaii and two French dependencies. The U.S. government has declared 2007 "The Year of the Pacific" as part of an effort to boost U.S. engagement in a strategic region that China has been aggressively courting with aid and diplomatic attention.

· Thanks be to God for His avenging of the oppressed through our Secretary of State Condoleeza Rice! · "Do not envy the oppressor, and choose none of his ways." (Proverbs 3: 31 NKJV)

3. Persecution For Religious Freedom On The Rise - CBN News

Growing challenges are mounting in the fight for religious freedom. A new report names the countries where it has become dangerous for people to worship. Wednesday's report from the U.S. Commission on International Religious Freedom highlights some of the worst offenders. This year, 11 countries are on the list as CPCs, or countries of particular concern. Once again, North Korea was considered the most oppressive regime. "North Korea is a country that I think we'd all agree is the worst violator of human rights abuses of any kind and also religious freedom abuses," said Michael Cromartie.

Other CPC countries include Pakistan, Saudi Arabia, China, and Vietnam. The commission also named eight countries to its watch list to monitor closely. Iraq was a new member to the list due to its human rights violations progressively getting worse.

· As we safely go to bed each night, may we remember in prayer, our Christian brothers and sisters who do not know if they will wake up the next morning because of their love for Jesus. · "The fear of man brings a snare, but whoever trusts in the Lord shall be safe." (Proverbs 29: 25 NKJV)

Sixteen small earthquakes with magnitudes up to 2.7 shook the park's Pitchstone Plateau last week. They began Monday, just before midnight, and were detected by seismographs operated by the University of Utah and partners. The quakes occurred on the southern edge of a volcano caldera at the center of Yellowstone. The volcano last erupted 70,000 years ago.

The largest quake occurred at 3:09 a.m. Tuesday and they continued until Wednesday, according to Bob Smith, a University of Utah professor. Smith said earthquake swarms are common in Yellowstone. As many as 70 swarms of small earthquakes have occurred in the region between 1983 and 2006. No one likely felt the most recent quakes, Smith said.

· Dear Lord, as we have seen so much natural, uncontrollable disaster this past week; may we remember to keep our eyes on You and not look to others for our ultimate protection! · "Look to Me, and be saved, all you ends of the earth! For I am God, and there is no other." (Isaiah 45: 22 NKJV)

China's new rich are sparking a population crisis by disregarding the nation's one-child rule. Under the policy introduced in 1979, families face fines if they have two or more children. But rising incomes, especially in the affluent eastern and coastal regions, mean that more and more people can afford to pay to have as many offspring as they like.

According to a recent survey by China's National Population and Family Planning Commission, the number of wealthy people and celebrities deciding to have more than one child has increased rapidly, despite fines that can be as high as $26,000 for each extra child. Almost 10% of high earners are now choosing to have three children because large families are associated with wealth, status, and happiness in China.

· There is a crack growing in the controls mandated by the Chinese government to prevent families from having multiple children. Praise God that this "buying" of family freedom will bring about many more Christians being born in areas where Jesus is not allowed! May the believers rejoice! · "Yet He sets the poor on high, far from affliction, and makes their families like a flock. The righteous see it and rejoice, and all iniquity stops its mouth. Whoever is wise will observe these things, and they will understand the lovingkindness of the Lord." (Psalm 107: 41-43 NKJV)

The Pentagon on Tuesday alerted more than 35,000 Army soldiers that they could be sent to Iraq this fall. The deployment orders signed by Defense Secretary Robert Gates, would allow commanders to maintain the buildup of troops through the end of the year if needed. President Bush has ordered nearly 30,000 additional troops to Iraq to quell a spike in violence, particularly in and around Baghdad. There are approximately 146,000 U.S. troops in Iraq.

This announcement comes as Bush is under increasing pressure to pull troops out of Iraq. Bush last week vetoed $124.2 billion legislation that would have funded the war while requiring troops to start coming home this fall. Meanwhile in Congress, House Democrats defiantly continue to push a plan to limit war funding to two-month installments.

· We thank You, Lord, for a godly President that You have sent to our nation for such a time as this. May You continue to give him Your wisdom and guidance as he walks such a dangerous and difficult path laced with terrorism. · As Mordecai told Esther how to defend her people, so may You continue to tell Your son, George W. Bush, how to defend his people, too. "For if you remain completely silent at this time, relief and deliverance will arise for the Jews from another place, but you and your father's house will perish. Yet who knows whether you have come to the kingdom for such a time as this?" (Esther 4: 14 NKJV)