President Bush on Wednesday said he's "inclined to believe we need" a troop increase in Iraq, and he said he's asked Defense Secretary Robert Gates to determine how such an increase could take place.

• Father we ask that Your wisdom rule over all troop deployments. We pray for Your guidance, strength, and courage for our military. • "Be strong and of good courage; be not afraid, neither be dismayed for the Lord your God is with you wherever you go." (Joshua 1:9) 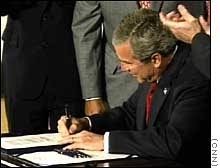 President Bush on Tuesday signed bills to raise federal funding for autism, shift AIDS money to rural areas and the South and create a government unit to oversee response to a bird flu pandemic or bioterrorism attack.

• Thank You Father for the passage of these health care bills. We ask that they be administered with compassion and that You protect them from misuse by those with personal agendas. • "To receive the instruction of wisdom, justice, and judgment, and equity." (Prov 1:3)

New Defense Secretary Robert Gates arrived in Baghdad on Wednesday, armed with a mandate from President Bush to help forge a new Iraq war strategy. He made the unannounced trip to the battlefront just two days after taking over at the Pentagon. "The whole purpose is to go out, listen to the commanders, talk to the Iraqis, and see what I can learn," Gates told reporters as he boarded his aircraft in Washington on Tuesday.

• Lord we ask that You teach Mr. Gates all the he must know to properly execute the duties of Secretary of Defense. We pray that Your Spirit will fill him, that a deep relationship to You will be formed in his heart. We declare Your protection over him as he visits Baghdad according to Psalm 91, and may he receive "the Spirit of wisdom and understanding, the Spirit of counsel and might, the Spirit of knowledge and the fear of the Lord." (Is 11:2)

Secretary of State Condoleezza Rice says the chief mission of U.S. diplomacy in the Middle East over the next two years will be to strengthen the "alignment" of moderate forces so they can take on extremists. She reiterated U.S. support for Palestinian Authority Chairman Mahmoud Abbas (Fatah), the Washington Times reported, calling Abbas " a responsible Palestinian voice."

• Lord we ask that our leaders see truth, that they may not fall into the trap of seeing safety where danger exists. We pray that they will stand firmly with Israel in all Middle East matters and not be swayed by politics and deception. We also pray for the souls of the Palestinian people, including Chairman Abbas and his government. May Your Spirit move in their lives to change hearts from enemy to friend. • "When a man's ways please the Lord He makes even his enemies to be at peace with him." (Prov 16:7)

• Lord, we thank You and rejoice that plans made against You and Your people will fail because You laugh from heaven. (Psalm 2:4) We ask that the wind of Your Spirit blow over our enemies, thwarting their actions and redeeming their souls from sin. • "Ask of Me and I will give you the heathen for your inheritance, and the uttermost parts of the earth for your possession." (Psalm 2:8)

Mt. St. Helens awoke Tuesday afternoon with a mild eruption, spewing a plume of steam and ash into the Washington State sky.

• "When these things begin to take place, stand up and lift up your heads, because your redemption is drawing near." (Luke 21:28)