A narrow hole drilled into a Utah mine may have missed a cavity where six miners are trapped, a federal official said Friday. A second, larger hole being drilled into the mine has a better chance of accuracy, said Richard Stickler, assistant secretary of the Department of Labor for mine safety and health. "We all should continue to have hope," Stickler said at a news conference at the mine.

· Fox News has just announced the names of the six miners who have been trapped under this mountain in Utah. They are: Kerry Allred, Don Erickson, Alonso Hernandez, Carlos Payan, Brandon Philips, and Manuel Sanchez. Pray for these miners by name, that God may yet spare their lives through miraculous intervention; and offer a prayer for the families, that they may be strengthened and comforted in this hour. May each one find "the peace of God that passeth all understanding." Amen.

..AP Photo: Specialist Jason Blatt looks at his screen as he works at his post on the floor of the New York Stock Exchange, Thursday afternoon, Aug. 9, 2007.

Wall Street's deepening fears about a spreading credit crunch sent stocks plunging again Thursday, with the Dow Jones industrials extending their series of triple-digit swings and falling more than 380 points. The catalyst for the market's latest skid: a French bank's announcement that it was freezing three funds that invested in U.S. subprime mortgages. 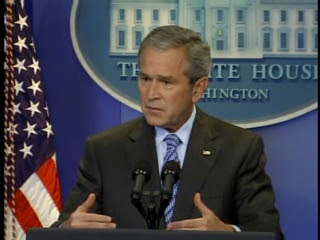 President Bush rejected Thursday the idea of raising the federal gasoline tax to repair the nation's bridges -- at least until Congress changes its ways on highway spending.

· Lord, we continue to pray for President Bush to seek Your wisdom. We ask for Your will and ways to be made known to him.

· "And wisdom and knowledge shall be the stability of thy times, and strength of salvation: the fear of the LORD is his treasure." (Is. 33:6)

4. Bush to order new crackdown on U.S. border - Politco - Today's papers: A summary of what's in the major U.S. newspapers.

The Bush administration on Friday will announce plans to enlist state and local law enforcement in cracking down on illegal immigrants, which previously was largely a federal function, according to congressional sources. Other stories

· Precious Lord, our trust is in You. We pray for these plans to be in the way of wisdom and protection. Lord, bring about the solutions to establish protection in keeping of the laws of the United States.

· "Show thy marvellous lovingkindness, O thou that savest by thy right hand them which put their trust in thee from those that rise up against them. Keep me as the apple of the eye; hide me under the shadow of thy wings from the wicked that oppress me, from my deadly enemies, who compass me about." (Ps.17:7-9)

The Bush administration has quietly opened a new diplomatic front in its efforts to free Lebanon from Syrian influence, with a move to undermine the authority of the country's pro-Syria president.

· Lord, we pray for freedom, salvation and wisdom for the people of Lebanon. We ask You to set a watch for all decisions to be done in wisdom and according to Your sovereign will.

· "And the Lord shall help them, and deliver them: he shall deliver them from the wicked, and save them because they trust in him." ( Ps.37:40)

· Pray for all works of deceitfulness and hidden agendas to come forth. Pray for truth to prevail. Pray for wisdom in dealing with President Pervez Musharraf.

· "Hide me from the secret counsel of the wicked; from the insurrection of the workers of iniquity: . . . . And all men shall fear, and shall declare the work of God; for they shall wisely consider of his doings. The righteous shall be glad in the Lord, and shall trust in him; and all the upright in heart shall glory." ( Ps.64:2,7-8)

7. Russian bombers buzz US base in Guam - London Telegraph

..Google Map: The island of Guam in the West Pacific

Russian bombers are reported to have buzzed an American military base for the first time since the Cold War when they flew over the Pacific island of Guam. Moscow said that US fighter jets were scrambled to intercept the two Tupolev-95 warplanes as they resumed the Cold War era practice of flying over Western offshore military installations in a mission on Wednesday.
Posted by Capitol Hill Prayer Partners at 12:29 AM