1.Michigan city could become first in U.S. under Muslim control - One News Now

A Detroit-area newspaper says the results of Tuesday's primary could lead to Hamtramck, Michigan, becoming the first city council in the U.S. to be controlled by Muslims. The Detroit News says there are four Muslims in the Tuesday primary. If they are among the candidates who win and go on to run in the November election, they would have a chance to join a fifth Muslim who already sits on the six-member council and is up for re-election in 2009.

Hamtramck -- historically a refuge for Catholic immigrants mostly from Poland and Ukraine -- was at the center of a controversy three years ago over an initiative allowing amplified calls to prayer from the city's mosques.

· Pray that the Lord will move Christians to run for office in this city and will give these Christians favor in the eyes of the electorate. Hamtramck's large Muslim population would seem to insure a Muslim city council, But God...Find this city on a Michigan map, lay hands on the city, and call forth God's blessing.

· "Except the Lord build the house, they labor in vain that build it; except the Lord keep the city, the watchman waketh but in vain." (Psalm 127:1) 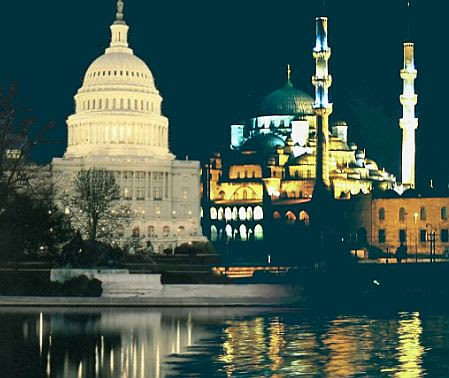 2. Jihad Watch Director and YAF Defy CAIR - CNSNews.com ("It is a common tactic of both the left and the Islamic advocacy groups in America to accuse every critic of purveying hatred and bigotry," said Spencer.

America's largest and most well-financed Islamic advocacy group has been called out for allegedly hiring terrorist sympathizers and for helping to advance a radical ideology incompatible with the principles of a free society. The Council on American Islamic Relations (CAIR) bills itself as a civil rights organization and as a responsible voice of moderation. But its history, legal activities, and financial ties suggest otherwise, said Robert Spencer, director of Jihad Watch.

· Praise the Lord that the truth about the attitude and activities of CAIR are being revealed. Praise the Lord for Robert Spencer and his work with Jihad Watch. Pray for God's net to be spread over the USA so that any predator "fish" is caught before it can create harm. Ask the Lord to bring this news to the American people through all the media.

Attacks on American-led forces using a lethal type of roadside bomb said to be supplied by Iran reached a new high in July, according to the American military.

· Continue to cry out for the Lord to intervene in the world's struggle with Iran and the crazed man who is that country's president. While not all our soldiers are men of integrity, they are not fighting in Iran to destroy life wantonly. Cry out for the souls of our soldiers that they may know salvation in Jesus Christ. Call for the malfunctioning of this new bomb.

· "The righteous shall never be removed: but the wicked shall not inhabit the land." (Proverbs 10:30)

The United States intends to freeze the financial assets of anybody deemed an opponent of the government of Lebanese Prime Minister Fuad Siniora.

· Praise the Lord for this order by President Bush. Syria thinks that it can play games with the USA and maintain its close ties with Russia and Iran. Lebanon has established itself as a democracy but has little power because of the presence of Hizbollah sponsored by Syria. Pray that this move by Bush will have impact on Syria.

In 28 years of responding to fires and saving lives, Fire Capt. John Ghiotto of the San Diego Fire Department never thought his job would require him to attend a Gay Pride parade.

· Pray for increased courage and favor for the San Diego firefighters and all those who stand against the homosexual agenda. Pray for the cancellation of this abominable parade of the deceived. Ask the Lord to protect the children and other innocents who may be involved in this activity.

· "I will early destroy all the wicked of the land; that I may cut off all wicked doers from the city of the Lord." (Psalm 101:8)

6. Utah Mine Executive Says Rescue Operations Within About 1,000 Feet of 6 Trapped in Mine - FOXNews.com

Crews hoping to get food and air to six coal miners in Utah drilled to within about 1,000 feet of the trapped men Wednesday, and hoped to reach them in about two days, one of the mine's owners said. It still isn't known whether the miners were alive more than two days after the initial cave-in.

· Pray for the safe rescue of the remaining miners still not found. Those in the know say that the mine collapse was caused by a minor earthquake, but that fact has yet to be verified. Speak comfort to the families of the trapped miners. Pray for the wise and effective use of all technology in this rescue.

A strong earthquake of 7.5 magnitude has occurred in the ocean 80 miles from Jakarta, Indonesia. A first thought is the development of a tsunami, which could devastate the people of the many islands that make up the country of Indonesia.

· Pray for a calming of the ocean that has been disturbed by the earthquake. Indonesia has been dominated by Muslims in recent years. Ask the Lord to turn people's hearts towards Him that they may know salvation in Jesus Christ and be freed from the oppressive Islam.

· "Watch ye therefore, and pray always, that ye may be accounted worthy to escape all these things that shall come to pass, and to stand before the Son of man." (Luke 21:36)
Posted by Capitol Hill Prayer Partners at 8:40 PM