The Middle East in Focus This week, for all the headlines cited below, please join us in proclaiming THIS DECREE: "And it shall happen in that day that I will make Jerusalem a very heavy stone for all peoples; all who would heave it away will surely be cut in pieces, though all nations of the earth are gathered against it." (Zechariah 12:3)

The United States offered Israel on Thursday an unprecedented $30- billion military aid package, bolstering its closest Mideast ally. The aid deal signed in a ceremony in Jerusalem represents a 25 percent rise in U.S. military aid to Israel, from a current $2.4 billion each year to $3 billion a year over 10 years. · Praise You, Lord that we have continued our military support of Israel. We continue to pray for Your protection and favor to be revealed in their land. · "And I will plant them upon their land, and they shall no more be torn up out of their land which I gave them, says the Lord Your God." (Amos 9:15 Amp)

Newly installed Israeli President Shimon Peres has quietly drafted a plan for the Jewish state to evacuate and transfer to the Palestinians nearly the entire West Bank and several Arab Israeli cities located within territory that is undisputedly Israel's according to the international community, WND has learned.

Prime Minister Ehud Olmert and Palestinian President Mahmud Abbas have been meeting regularly in recent months with the aim of drafting the principles of a permanent agreement before the US-brokered conference of Mideast nations, which is scheduled to take place in Washington this coming November, Yedioth Ahronot reported on Thursday. 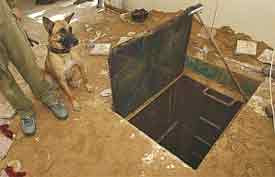 The IDF on Tuesday uncovered an underground tunnel leading from the Gaza Strip towards Israel, the army said Wednesday. The tunnel shaft was connected to a Gaza hothouse used to grow tomatoes and situated 700 meters from the border fence.

NewsIranian missiles can hit warships operating anywhere in the Gulf and Oman Sea, the commander of Iran's Revolutionary Guards said on Wednesday, the day US officials said they might label his forces "terrorists".
Posted by Capitol Hill Prayer Partners at 12:45 AM