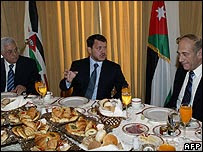 Prime Minister Ehud Olmert is holding "serious discussions" with Palestinian Authority Chairman Mahmoud Abbas in an effort to put together an agreement of principles before a regional conference to be held in November, President Shimon Peres said Wednesday.

A number of Arab countries have recently accelerated their nuclear programs in response to Iran's renegade nuclear quest, claiming they are pursuing the 'peaceful' atom. The United Arab Emirates, Saudi Arabia, Yemen, Jordan, and Egypt all have nuclear programs at different stages of development, even though the region has huge oil reserves to produce cheap energy
Posted by Capitol Hill Prayer Partners at 6:59 PM