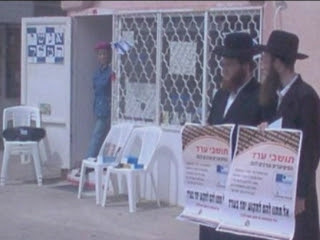 The state of Israel promises religious freedom to all faiths. However, in some Israeli towns, Jews who believe that Jesus is the Jewish Messiah face persecution. One is a town called Arad, which sits in the middle of the Negev Desert, about a two hour drive south of Jerusalem. For most of the nearly 25,000 residents, it's a quiet setting. But for others, it's been the scene of noisy protests and almost daily harassment. An ultra-orthodox sect called the Gur harasses many of the Messianic Jews in the town. "We meet at a congregation building," Yakim Figueros, a messianic pastor, said. "There's a narrow way to go in, I mean the gate. So they have two of their people standing on either side and reading curses against everyone that walks in: 'May his children be orphans. May their wives be widows' and so on."

The center of town is another place of harassment, where many retired Jewish immigrants gather. Most of the men here are senior citizens from the former Soviet Union. Some are holocaust survivors. They come here to play their favorite game at this chess club called The King's Men. Eddie and Laura Beckford established the chess club for these men. "We have books and Bibles in all the languages," Eddie said. "We always keep a stock of Russian Bibles - Old Testament, New Testament. They have a hunger for knowledge, reading and stuff because I guess books were abandoned behind the Iron Curtain." Laura added, "And we try to meet their physical needs too. We're trying to get the funds for a hearing aid or other physical things, whatever is needed." They provide a place to play chess and dominoes which are games these men love. The club set up chess tournaments and also supply used clothing for Bedouins and anyone in the community. But the chess club has been vandalized and firebombed. Many suspect it is the work of the ultra-orthodox sect. Many of the Messianic Jews have also had their names and faces placed on flyers distributed throughout Arad.

Arad's mayor hopes these two groups will find a way to live together. "I try to make both communities try to figure out how to work together, because this is how I believe. I came to the desert for peace not for fight." In the meantime, the Messianic Jews of Arad are relying on and asking for prayer. "So pray for a revival, pray for His kingdom, for His Name to be glorified here in Arad and not for the persecution to stop," Laura said. "And pray for people to have the courage and strength to stand firmly in the faith." (CBN News.com)

· Please pray as Laura Beckford requests, not only for Arad but also for other Messianic Jews living in Israel. Continue to pray for all the Isrealis, for many are secular Jews and many Arabs. Pray for Jesus to be real, to be recognized, and to be worshipped in Israel as the Lord and Savior of all mankind. · "O Lord, our Lord, how excellent is Thy Name in all the earth! who hast set Thy Glory above the heavens." (Psalm 8:1)
Posted by Capitol Hill Prayer Partners at 12:28 AM