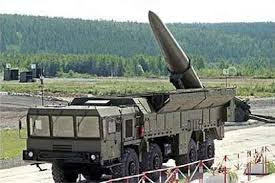 Russia began delivering 50 anti-aircraft missiles to Syria yesterday. An ally of Moscow throughout the Cold War, the Syrian regime is a key supporter of both Iran and Hezbollah in Lebanon. The Pantsyr-S1E anti-aircraft missiles are part of a $900 million contract signed earlier this year between Syria and the Russian state arms firm, Rosoboronexport. Vladimir Putin also announced yesterday, ambitious plans to revive Russia's military power and restore its role as the world's leading producer of military aircraft.

The Palestine Liberation Organization/Palestinian Authority will enter into no peace pact with Israel that does not award the Muslim Arabs, who call themselves "Palestinians," full and irreversible control over the site most sacred to the Jewish people.

3. Hamas: Israel Should Be Ready For Strike's Effects - Ynet News

A Hamas gunman was killed and three others wounded in an IDF airstrike early Wednesday near Gaza City, Palestinian security and medical sources confirmed. Hamas identified the man killed as Yehia Habib, a senior field commander in Gaza City. On Monday, six Hamas operatives were killed in an IDF airstrike when an IAF missile hit their car in central Gaza containing a Qassam-launching cell. Hamas identified them as members of its military wing and implied that they would seek revenge. A spokesman for the Izz al-Din al-Qassam Brigades described Israel's actions as an "ugly Zionist massacre" and said "all options were open" for a response.

Fatah's armed wing, the Aksa Martyrs Brigades, announced Tuesday it would no longer honor understandings reached with Israel, and called on its members to carry weapons to defend themselves against the IDF.

A roadside bomb killed the governor of the southern Muthanna province on Monday, police said, the second assassination of a top provincial official in just over a week. The blast struck the convoy carrying Mohammed Ali al-Hassani, killing him and three other people On Aug. 11, the governor and police chief of another southern province, Qadasiyah, also were killed in a roadside bombing attack.
Posted by Capitol Hill Prayer Partners at 12:36 AM