· We ask Your wisdom, truth, and heart changes for the Iraqi government officials to be able to accomplish the goal of a truly democratic Iraq. We pray for wisdom for our own leaders to spend tax-payer money in accordance with Your knowledge and will.

· For the Lord giveth wisdom: out of His mouth cometh knowledge and understanding. (Proverbs 2:6 KJV)

A conflict of interest involving the radical Nation of Islam and the Washington, D.C., affiliate of the Public Broadcasting System is an example of unethical journalism that benefits extremist Muslims, according to a national security expert and a Hollywood filmmaker.

[ "The key forum at this year's annual Cairo Anti-War Conference was titled "Bridge-building Between the Left and Islam," and focused on practical ways to increase cooperation. The aim of the conference sessions were described in one piece of literature as tackling "the challenges and prospects facing the international anti-war and pro-intifada movements" and planning "strategy and tactics for bridging the gap and uniting Islamist and leftist ranks in the face of U.S. imperialism and Zionism."" Click ]

· Lord we ask that the Wind of the Holy Spirit move over the news and entertainment media in all areas, to remove the agendas that are not truthful and objective in nature. We pray that You would target hearts to bring about revelation of Your kingdom and truth.

a) WASHINGTON Fox News-- Idaho Sen. Larry Craig is finding himself increasingly isolated from his political allies as more Republicans call for him to resign over his arrest in an airport men's room.

b) CNSNews.com- A Democratic congressman says he was tired after a delayed flight and frustrated by a further delay in getting his baggage when he pushed a United Airlines baggage employee at Dulles Airport near Washington, D.C. The Aug. 19 incident resulted in assault and battery charges being filed against Rep. Bob Filner (D-Calif.).

· Father we ask for Your Spirit to wash over the hearts and minds of our legislators in Washington, and that You will cause these incidents to bring good to our political process. We pray for a resurgence of integrity, peace, righteousness, and self-control to have precedence in our Congress.

· And we know that all things work together for good to them that love God, to them who are the called according to His purpose. (Romans 8:28 KJV) 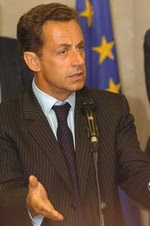 As France prepares to assume the EU's driving seat in July next year, President Nicolas Sarkozy has indicated he wants to turn the 27-nation bloc into a decisive player in the global arena; something he says would result in a fairer and more harmonious world order.

· Lord, You see the domination plans of the spirit of anti-Christ. We declare that its plan will fall to the ground, and Your plans will prevail in the world arena.

President Ahmadinejad of Iran said yesterday that American political influence in Iraq is "collapsing rapidly" and said his government is ready to help fill any power vacuum.

· Father, You laugh at the bragging of the Iranian President. We declare by the power of the Living God that his plans will come to nothing and that You will move in Iran to remove the evil that has held their nation captive.

· But the One who rules in heaven laughs. The Lord scoffs at them. Then in anger He rebukes them, terrifying them with His fierce fury.(Psalm 2:4,5 NLT)

Sudan is defying the international community by continuing to send weapons to the military and a government-aligned militia in the war-torn province in Darfour, according to a new report.

· Lord we ask that You break in pieces this network of death in Sudan. We pray that Your mercy would prevail for the people who have been victims of their hatred.

· He shall judge the poor of the people; He shall save the children of the needy, and shall break in pieces the oppressor.( Psalm 72:4 KJV)

· Lord, we thank you for this spark of hope amidst the conflict in Iraq. We pray that You will intervene by the Power of the Name of Jesus and the working of the Holy Spirit to unravel the plans of this militia permanently.


1. Holy forfeit! Israel willing to give up Temple Mount - WND

Israeli Defense Minister Ehud Barak told the Egyptian government the Jewish state is willing to forfeit control over the Temple Mount -- Judaism's holiest site -- to the management of Egypt, Jordan and the Palestinian Authority, according to an Arab media report.

EU security officials have been conducting secret talks with Hamas leaders in the Gaza Strip over the past few weeks, Palestinian Authority officials told The Jerusalem Post on Tuesday.

..A rock formation in the Negev desert near Beersheba.
Photo: Courtesy

Development in the northern Negev received a boost on Tuesday from Prime Minister Ehud Olmert, who approved the creation of a new rural settlement district in eastern Lachish, consisting of seven new communities.

Israel is considering the construction of a border fence in cooperation with Egypt to prevent the passage of terrorists, smugglers and asylum-seekers between the two countries, Prime Minister's Office Director General Ra'anan Dinur told the Knesset Committee on Foreign Workers on Tuesday.

Do you ever have one of those days at work where you are so frustrated about the challenges and problems that you wonder whether it is all worth it? I had one of those days yesterday, as I spent hours talking to hostile reporters about the latest scandal to engulf a Republican member of Congress.

I am sure you have heard the details by now. Senator Larry Craig of Idaho was arrested in June in a Minneapolis airport men?s room by an undercover police officer who alleges that the senator was soliciting him for sex. Craig denied the charge, but nevertheless pled guilty to disorderly conduct.

The story hit the news Monday night, resulting in a press conference by the senator and his wife, during which he vehemently denied he was a homosexual, denied he had done anything inappropriate in the Minneapolis airport and vowed to fight. However, adding to the senator's credibility problem is the fact that rumors about his sexuality have circulated for years, and a homosexual activist claimed to have "outed" him last year.

Republican leaders, unlike in the Foley scandal, were quick to react. Mitt Romney promptly removed Craig as a co-chairman of his campaign. Senator John McCain called the case "disgraceful." Senate Republican Leader Mitch McConnell informed Craig yesterday that there would be an Ethics Committee investigation. In interviews, I expressed the hope that Craig would see the "handwriting on the wall" and step down from his Senate seat.

Big Media, of course, is having a field day. The same pundits who argued that Bill Clinton having sex in the Oval Office with an intern was a private, personal matter are not only condemning Craig, but they are also speculating that people like you will ?cut and run? from public policy battles and sit out the 2008 elections.

They may be right, but I hope they are wrong. We should be outraged by what the senator appears to have done. But it would be foolish indeed to sit out of the political process and turn the country over to Hillary Clinton, the ACLU, MoveOn.org and the pro-abortion, pro-homosexual rights crowd.

I hope Craig resigns, but I am not going to resign from the battle to defend our values just because we may have discovered another hypocrite in Washington.

Let the high praises of God be in their mouth, and a two-edged sword in their hand;
To execute vengeance upon the heathen, and punishments upon the people;
To bind their kings with chains, and their nobles with fetters of iron;
To execute upon them the judgment written: this honour have all his saints. Praise ye the LORD. (Psalm 149:6-9)
Posted by Capitol Hill Prayer Partners at 7:54 PM