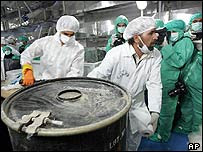 Egyptian born Muslim Mohamed ElBaradei, the head of the United Nations International Atomic Energy Agency, is now saying that Iran has slowed down its nuclear development and ElBaradei is calling for Iran's government to give up its nuclear program altogether. The message from ElBaradei is confusing, but typical of the diplomatic drivel that has become the hallmark of the UN handling of thug nations such as Iran, the world's foremost sponsor of terrorism. ElBaradei's positioning is to try to get the West to delay any substantial action against Iran while promoting idle talk about Iran cooperating with the international community by shutting down its nuclear program.

In fact, ElBaradei told reporters he is seeking a "time out" in the confrontation between Iran and the West over Iran's nuclear program. But that is just the very issue. ElBaradei has given Iran nearly four years worth of a "time out" by allowing the nation to hold the Western world at bay through fruitless negotiations while all the while Iran has beefed up its uranium enrichment to levels capable of producing material for a nuclear bomb. Little has changed for ElBaradei since November 23, 2004 when he said of Iran, "I am not ready to jump to the conclusion and say this is a weapons program unless I see a diversion of nuclear material to such a program or I see clear cut proof that this is a weapons program."

Once again, ElBaradei is giving Iran the benefit of the doubt. And now one has to question ElBaradei's alliances. He told reporters that there is a "need to shift from the mode of confrontation to the mode of goodwill and cooperation." But who is cooperating? Russia and China are certainly cooperating with Iran to provide nuclear technology, missile technology and other weapons information that assist Iran in its quest for nuclear weapons. Those who are not cooperating are the United States, Israel and Great Britain, who would like to see Iran shut down its nuclear program as Iran's President continues to threaten Israel with destruction and the United States with demise.

Trusting an Islamic Egyptian to police radical Islamists in a war against Israel and the West is probably not the wisest course of action. Isaiah 31:1 says, "Woe to them that go down to Egypt for help; and stay on horses and trust in chariots, because they are many; and in horsemen because they are very strong; but they look not unto the Holy One of Israel, neither seek the Lord!" In war, deception is key. When the United Nations point man on curbing nuclear weapons continues to ask for more time when the perpetrator is threatening annihilation of an entire people, the world ought to take notice and have some discernment.

Have a Blessed and Powerful Day!

Posted by Capitol Hill Prayer Partners at 12:40 AM