Greetings to ALL our Readers!

· Dear Jesus, we humbly ask You to end these partisan politics and to please be glorified with the continued equipping of American troops to end the war in Iraq. May those who wish to end this war that You have allowed, for Your purposes, be stopped in their maliciousness and be brought to You in salvation.

· "Let all bitterness, wrath, anger, clamor and evil speaking be put away from you, with all malice. And be kind to one another, tenderhearted, forgiving one another, even as God in Christ forgave you." (Ephesians 4: 31-32 NKJV)

2. Threat of attack in US is rising, say spy agencies - London Times, CNSNews.com

US intelligence chiefs believe that al-Qaeda will probably seek to use "contacts and capabilities" in Iraq for a terrorist attack on American soil, according to a declassified document released yesterday. According to the report, Al Qaeda terrorists are rebuilding their capabilities and continuing to plan mass-casualty attacks inside the United States.

· Heavenly Father, we thank You continually that You are the One who knows the beginning from the end and are omniscient! Thank You for preventing the unthinkable catastrophic events that would befall us if not for our faith in You and prayers! 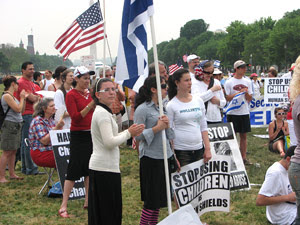 More than 3,000 Christians from across the United States are in the nation's capital this week to show their support for Israel.

· God of Israel, You are the One who loves this land with a never ending love! May we as Americans love her as much and defend her in our prayers! May Israel be saved!

· "Brethren, my heart's desire and prayer to God for Israel is that they may be saved." (Romans 10: 1 NKJV)

Barrels of nuclear waste tipped over during a powerful earthquake in Japan on Tuesday, and now officials are investigating whether it caused any radioactive leaks.

· Dear Jesus, we ask You to keep the country of Japan from radioactive and any other harm in the aftermath of this earthquake. You knew this would happen before time began, and we thank You in advance for those who will come to know You as their Savior in its aftermath.

Bulldozers are rolling again on the U.S.-Mexico border, moving hundreds of tons of dirt to make way for a 16-foot steel fence in an area that once was the most popular crossing for illegal immigrants.

· Dear Father, You are the Protector of the widows and the orphans. Please allow those who wish to become Americans the opportunities to become citizens, and those who deliberately remain illegals and mean us harm, be removed from our country.

A Brazilian plane crashed Tuesday in Sao Paulo, killing15 on the ground and all 180 aboard. Firefighters fought to extinguish a fire at the site where a TAM airlines commercial jet crashed in Sao Paulo, Tuesday, July 17. The plane with as many 170 people aboard crashed into a gas station and burst into flames in Sao Paulo after skidding off a runway that has been criticized as being too short in a driving rain, the nation's airport authority said. Sao Paulo State Gov. Jose Serra said the hopes of finding any of the 176 people aboard alive "are practically nil," since the temperature inside the plane reached 1,830 degrees Fahrenheit. Brazil, a country steeped in Animism and other false religions, has had unspeakable catastrophe visit their Sao Paulo airport.

· We thank You Father , that You have prevented intended and unintended disasters from coming near our shores and airspaces! May many be saved in Brazil and worldwide from the evil one and his false religions!

· "Fear not, for I have redeemed you; I have called you by your name; you are Mine. When you pass through the waters, I will be with you; and through the rivers, they shall not overflow you. When you walk through the fire, you shall not be burned, nor shall the flame scorch you." (Isaiah 43: 1a-2 NKJV)
Posted by Capitol Hill Prayer Partners at 4:02 PM