1. Al Qaeda Cell in the U.S. Or On Its Way, According to New Intel - ABC News

Senior U.S. intelligence officials tell ABC News new intelligence suggests a small al Qaeda cell is on its way to the United States, or may already be here.

· Thank You gracious Lord for revealing the truth about an imminent terrorist strike to our administration. We humbly ask You that You will be their "eyes, ears and sight" through this potential strike and any future catastrophes planned by the evil one! May the Free World be saved for Your Glory!

2. Bush says a pullback will occur 'in a while' - Int'l Herald Tribune 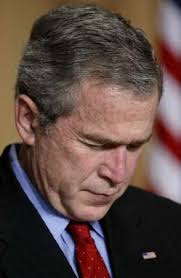 Fearful of a Republican rebellion over Iraq that his own aides believe could force him to change course, President George W. Bush said Tuesday that the United States would be able to pull back troops "in a while," but called on Congress to wait until September to debate the future military presence there.

· Pray that God's perfect timing be followed in any drawdown of American troops in Iraq.

Fears of further problems in the US mortgage industry and the broader economy flared on Tuesday, triggering a sell-off in credit markets as investors sought safe havens.

· In these perilous times, nothing will be secure and stable except the knowledge of the Rock of our Salvation, Jesus Christ. Pray for the remnant in our nation, that we may know how to "steer the ship of our family finances" safely through these troubled waters by obeying biblical principles of stewardship. And let us ALWAYS bless Israel, "the apple of God's eye."

· "I will bless those who bless you, And I will curse him who curses you; And in you all the families of the earth shall be blessed." (Genesis 12:3)

The euro shot to an all-time high against the U.S. dollar Tuesday on concerns about the American economy that were fueled by discouraging growth forecasts from key U.S. retailers and homebuilders.

· We ask in Your Son's Holy Name for help for our beloved United States as she is assailed on all sides. May she return to You through these troubles that are both known and unknown; past, present and future. Please show us Your mercy, Lord!

· "For I know the thoughts that I think toward you, says the Lord, thoughts of peace and not of evil, to give you a future and a hope." (Jeremiah 29: 11 NKJV)

The United States is sending a third aircraft carrier to the Middle East, the U.S. Navy said Tuesday in a move that bolstered U.S. military capability at a time of tension with Iran and stepped-up operations in Iraq.

· Dear Commander of the Heavenly Hosts, we humbly ask You to guide this great warship on her way to lands that include the "Apple of Your Eye," Israel. May she help bring Your Peace to these lands for Your sake!

· "He shall speak peace to the nations; His dominion shall be 'from sea to sea, and from the River to the ends of the earth.'" (Zechariah 9: 10b NKJV)

The sound of unbridled joy seldom breaks the quiet of the British Museum's great Arched Room, which holds its collection of 130,000 Assyrian cuneiform tablets, dating back 5,000 years. Searching for Babylonian financial accounts among the tablets, Michael Jursa, a visiting professor from Vienna, suddenly came across a name that he half remembered - Nabusharrussu- ukin, described there in 2,500-year-old writing as "the chief eunuch" of Nebuchadnezzar II, king of Babylon. Mr. Jursa, an Assyriologist, checked Chapter 39 of the Book of Jeremiah, and he found, spelled differently, the same name - Nebo-Sarsekim. Nebo-Sarsekim, according to Jeremiah, was Nebuchadnezzar II's "chief officer" and was with him at the siege of Jerusalem in the year 587 before the common era, when the Babylonians overran the city.

[To view this article in its entirety, go here.]

· Heavenly Father, we thank You that Your Word is Truth! May many come to know Your Son, Jesus as their Savior through this unbelievable revelation that only You could bring!

· "Sanctify them by Your truth. Your word is truth. And for their sakes I sanctify Myself, that they also may be sanctified by the truth." (John 17: 17 & 19 NKJV)

For the second time in a week, Pope Benedict XVI has corrected what he says are erroneous interpretations of the Second Vatican Council, reasserting the primacy of the Roman Catholic Church and saying other Christian communities were either defective or not true churches.

· With all respect to the Pope, the Word of God is clear on this point: salvation can be in no other Name but Jesus.

· "Nor is there salvation in any other, for there is no other name under heaven given among men by which we must be saved." (Acts 4:16)
Posted by Capitol Hill Prayer Partners at 10:48 PM