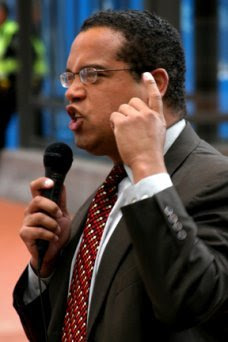 Rep. Keith Ellison (D-MN) continues to garner attention. A vocal critic of the Bush Administration, he first got Washington buzzing with word that he would take his oath of office on the Koran, rather than the Bible. Rep. Ellison has joined the "Impeachment Caucus" - a gang of 14 House members who are co-sponsoring articles of impeachment against Vice President Cheney. But Ellison's most recent comments have been picked up by foreign media outlets and will no doubt find a receptive audience on Al Jazeera.

At a gathering of Minnesota atheists on July 8th, Rep. Ellison took up where former Congresswoman Cynthia McKinney (D-GA) left off. Referring to the terrorist attacks of September 11, 2001, Ellison remarked, "It's almost like the Reichstag fire, kind of reminds me of that. After the Reichstag was burned, they blamed the Communists for it and it put the leader of that country [Hitler] in a position where he could basically have authority to do whatever he wanted."

For those who may not recall their history, the Nazis exploited the arson of the German parliament as an excuse to crack down on their political opponents, and a debate has raged in academic circles about who set the fire and why.

For Ellison to compare President Bush to one of the worst mass murderers in history is outrageous enough. But in using that specific analogy, Rep. Ellison came very close to embracing the 9/11 conspiracy theories of the lunatic fringe, and he knew it. Ellison quickly attempted to spin his own comments, saying that he was not suggesting 9/11 was a U.S. plot because "that's how they put you in the nut-ball box -- dismiss you."

Unfortunately, significant percentages of Muslims here and abroad refuse to believe the truth about the attacks, and Rep. Ellison's remarks will no doubt fuel their denial.