Syria warned Israel it would send troops into Lebanon during the Second Lebanon War if Israeli forces advanced into a Lebanese region adjacent to Damascus, Hezbollah leader Hassan Nasrallah said. 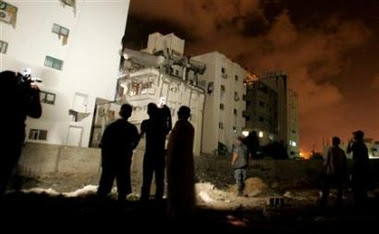 An Israeli aircraft attacked a building in Gaza City on Tuesday, the army said, causing substantial damage to the structure.

Militants from Palestinian Authority President Mahmoud Abbas' party the past few days organized a terrorist cell in the northern West Bank to commit attacks against Israel using the name Abu Ammar Brigades, according to Fatah militants leaders speaking to WND.

Israeli Prime Minister Ehud Olmert is offering to negotiate with Palestinian President Mahmoud Abbas towards an "agreement of principles" that would eventually lead to a Palestinian State. Olmert's proposal to Abbas reportedly stems from the Israeli leader's belief that it is essential for Israel and the Palestinians to first discuss relatively non- controversial topics, before moving on to more complex issues.

If Abbas and the Palestinian government accept Olmert's proposal, the two sides will begin negotiations on the characteristics of a future Palestinian state, its official institutions, its economy, and the customs arrangement it will have with Israel. After completing the "agreement of principles," the two sides will tackle more sensitive issues, such as final borders and the question of Palestinian refugees currently living in neighboring countries.

6. US clamps down on Hizb'Allah funding - ICEJ News

In Washington, the Bush administration acted on Tuesday against an Iran-based foundation which it accused of supporting the militant Hizb'Allah terror group in Lebanon. The foundation, which operates a branch in the United States, had allegedly been involved in fundraising for Hizb'Allah. "We will not allow organizations that support terrorism to raise money in the United States," a US Treasury Department official said.

The government also moved against a Beirut firm that the US government believes was used by Hizb'Allah "as a cover to manage its financial activity." The actions taken by the government include the freezing of all bank accounts and assets belonging to those identified on Tuesday. Additionally, Americans are forbidden from doing business with them.

According to the US, senior members of the named foundations were directly involved in Hizb'Allah's operations against Israel last summer.
Posted by Capitol Hill Prayer Partners at 12:33 AM