President Bush will undergo a routine colonoscopy Saturday and temporarily hand presidential powers over to Vice President Dick Cheney. The procedure will be done at his Camp David, Md., mountaintop retreat. Mr. Bush had colon and rectal cancer surveillance in June 2002, and this one is the five year re-examination. The president has had no symptoms," Snow said. The procedure will be supervised by the president's doctor, Richard Tubb, and will be performed by a medical team from the National Naval Medical Center at Bethesda, Md. The 2002 procedure began at 7:09 a.m and ended at 7:29 a.m. Bush woke up two minutes later but did not resume his presidential office until 9:24 a.m., after Tubb conducted an overall examination. Tubb said he recommended the additional time to make sure the sedative had no aftereffects.

Snow said that because president will be under the effects of anesthesia, he once again has elected to implement Section 3 of the 25th Amendment to the Constitution. Cheney will serve as acting president until Bush notifies authorities that he is ready to reassume his powers. In 2002, Bush transferred presidential powers to Cheney for more than two hours during the routine colon screening that ended in a clean bill of health. It was only the second time in history that the Constitution's presidential disability clause was invoked. President Reagan was the first to invoke the Constitution's 25th Amendment since its adoption in 1967 as a means of dealing with presidential disability and succession.

· Pray that the President has no abnormalities in his colon and that the procedure is completed smoothly and skillfully. Ask the Lord for protection of our land while V.P. Cheney has presidential authority during Mr. Bush's sedation. In this time, hour, day, the president must be covered with fervent prayer.

· " I [Paul] exhort therefore, that, first of all, supplications prayers, intercession, and giving of thanks, be made for all men; for kings, and for all in authority; that we may lead a quiet and peaceable life in all godliness and honesty." ( 1 Timothy 2:1,2) 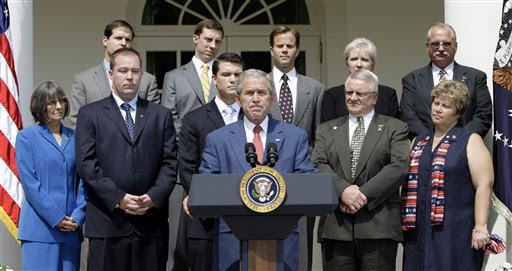 President Bush, ratcheting up a fight with Congress over Iraq, accusedDemocrats on Friday of conducting a political debate on the war while delaying action on money to upgrade equipment and give troops a pay raise.

· While debate is good to settle differences and to bring out the truth and the best solutions, the rancor between Congress and President Bush does the country no good and encourages our enemies to create more division. Pray that the Lord will show our country how to act upon the needs of our military and the morale of our soldiers. Also, bind the spirits of strife and confusion swirling about the president and Congress.

· "Let them be confounded and put to shame that seek after my soul; let them be turned back and brought to confusion that devise my hurt." (Psalm 35:4)

A U.S. judge on Thursday threw out former CIA analyst Valerie Plame's lawsuit against Vice President Dick Cheney and other Bush administration officials for disclosing her identity to the public.

· This lawsuit is part of the same problem involving "Scooter" Libby, whom President Bush released from serving extensive prison time for a crime not committed. Whether or not V.P. Cheney and other Bush officials should be investigated is now a matter for the Lord to decide. Only He knows what is in the hearts and plans of man and will expose wrongdoing in His time. Pray that justice is served and that this matter can be closed.

· " So likewise shall My heavenly Father do also unto you, if ye from your hearts forgive not every one his brother their trespasses." (Matthew 18:15)

Experts have often wondered what proportion of men who download explicit sexual images of children also molest them. A new US government study of convicted Internet offenders suggests that the number may be startlingly high: 85 percent of the offenders said they had committed acts of sexual abuse against minors, from inappropriate touching to rape.

· Praise the Lord that this very serious issue of pornography and the abuse of children has been put under the spotlight. Although God created us as sexual beings, He also gave us guidelines in His Word for our behaviors. Please pray for the innocent victims of child molestation that they be set free from any effects of violation. Please pray for the men who perpetrate such crimes so that they can also be set free from spiritual captivity of perverse behavior.

· "But whoso shall offend one of these little ones which believe in Me, it were better for him that a millstone were hanged about his neck, and that he were drowned in the sea." (Matthew 18:6)

A contract worker at the Oak Ridge Reservation nuclear research complex has been arrested and charged with stealing and trying to sell highly classified nuclear equipment.

· Again, problems of theft and treason have surfaced at the highly significant US nuclear facility. Find Oak Ridge Reservation on a map of Tennessee and lay hands on the site, asking the Lord to protect it and the materials within. Pray against the spirits of thievery and misconduct having any power in the site. Spiritual wickedness is occurring there.

· "He that walketh uprightly walketh surely: but he that perverteth his ways shall be known." (Proverbs 10:9) ·

The top commanders in Iraq and the American ambassador to Baghdad used video links with Washington on Thursday to appeal for more time, both to allow for success on the ground and to more fully assess if the new strategy is making gains.

· Praise the Lord that those in situ have been given a voice about the war in Iraq. Ask the Lord to give Congress wisdom in responding to the commanders and the ambassador. When people's lives are involved, politics must take the rear seat. Pray against a defeatist spirit in the USA.