Israeli President Shimon Peres called on the world in an interview Tuesday to form a united front against Iran that would force the Islamic republic to end its pursuit of nuclear weapons. Syria is readying for potential war, whether offensively, as part of an attempt to retake the Golan Heights, or defensively, if ally Iran should be attacked over its nuclear program.

Former British Prime Minister Tony Blair on Monday kicked off his first visit to the Middle East as the international community's new envoy to the region, hoping to add new momentum to fledgling peace efforts between Israel and the Palestinians. 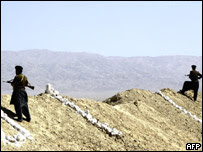 Pakistan has responded angrily to suggestions from the United States that American forces might be sent into Pakistan to strike at Osama Bin Laden.
Posted by Capitol Hill Prayer Partners at 12:23 AM