Recipe For Massacre in Iraq 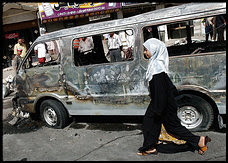 Retired military officer and author Ralph Peters penned a blistering response today to the Washington politicians in both parties who are pushing for a retreat from Iraq, calling them the "cowards on Capitol Hill."

He predicts that if they succeed in forcing a withdrawal, the inevitable result would be "a slaughter of the innocents - so many dead the bodies will never be counted." He also speculates that Iran will fill the vacuum left by America's retreat from the Middle East and will effectively take control of Iraq's southern oil fields.

Peters is far from alone in his analysis. Virtually any military man in Washington will tell you the same. Retired four star General Jack Keane said today that Iran's operatives are already all over Iraq, providing weapons and advice to literally all of our opponents, whether they are Shiites or Sunni.

Iran smells weakness, and you can bet our enemies across the world are picking up the same putrid scent, and likely picking sides. We will be less safe after a retreat, my friends - not more!

Finally, what about the men and women in Baghdad, Fallujah and Anbar Province right now giving everything they have for America? Many of them joined the U.S. military after 9/11 and after the war in Iraq began. Over 3,500 have died and another 25,000 have been wounded. They volunteered for this war because they believed our country was serious about defeating the Islamofascists who attacked us and who right now are planning the next attack on our homeland.

This war is not yet won, and it is far from over. Do Reid and Pelosi, Lugar and Voinovich, and the rest of the defeatists even think about what it means to give up and cause the sacrifices of so many to be in vain?