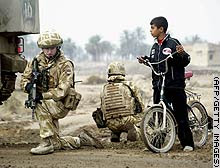 Great Britain has told the United States it will begin withdrawing troops from Iraq within weeks. British Prime Minister Tony Blair will order nearly half the British troops in Iraq home by the end of 2007, British news outlets reported early Wednesday. Today, Blair's decision to remove 1,600 British soldiers from Iraq followed by a further 3,000 by the end of the year was welcome news to the Bush administration, Vice President Dick Cheney said Wednesday. The decision is "actually an affirmation that there are parts of Iraq where things are going pretty well," Cheney said during a visit to Japan.

• Dear Heavenly Father, we humbly ask that You will confront and destroy the deaf and dumb spirit that is responsible for the lack of resolve to continue to fight the "good fight" that You began in March, 2003 with the fall of Baghdad! May Mr. Blair, Vice President Cheney and other world leaders who have been helping to eradicate radical Islam turn to You and seek Your wisdom. May they know that only Your plans and not theirs will win this war! • "Keep me, O Lord, from the hands of the wicked; preserve me from violent men, who have purposed to make my steps stumble. O God the Lord, the strength of my salvation, you have covered my head in the day of battle."
(Psalm 140: 4, 7 NKJV)

A new national survey by Public Opinion Strategies and the Moriah Group, shows that a majority of the American people still support President Bush and want to win the war in Iraq. By a 53 percent to 46 percent margin, respondents surveyed said that "Democrats are going too far, too fast in pressing the president to withdraw troops from Iraq."

• May we as Americans, continue to support our president and troops in prayer during this time of war. May the critics who mean harm to our nation's security and to our troop's safety be exposed for their true disdain for our country and be vanquished.
• "The steps of a good man are ordered by he Lord, and He delights in his way. Though he fall, he shall not be utterly cast down; for the Lord upholds him with His hand." (Psalm 37: 23 & 24 NKJV)

Two years ago President Bush and Saudi Arabia's then Crown Prince Abdullah jointly called for a greater exchange of students, but exposed terror plots and a history of lax screening have raised concerns about the nearly 10,000 Saudis in the United States on student visas. These visa figures from the U.S. Immigrations and Customs Enforcement were revealed less than a month after the Defense Intelligence Agency issued an unclassified statement that said al Qaeda's Iraq faction considered using student visas to get more than a dozen operatives into the United States. So far, none of those operatives have entered the U.S.

Considering that 15 of the 19 9/11 hijackers were Saudis, and some had been issued student visas, the new information on Saudi student visas is relevant. According to a Nixon Center expert in 2005, 60 per cent of terrorists who entered Europe in the previous decade did so via student visas.

• Dear Lord, may America's leadership; and customs and law enforcement agencies, turn to You with their needs to discern who is good and who is evil. May they know that only You have the answer! • "Then you shall again discern between the righteous and the wicked, between one who serves God and one who does not serve Him." (Malachi 3: 18 NKJV)

In a statement reflecting the growing distrust between Moscow and the West, Russian general Nikolai Solovtsov on Monday warned that Poland and the Czech Republic risk being targeted by Russian missiles if they agree to host U.S. missile defense bases. Meanwhile, Polish prime minister, Jaroslaw Kaczynski , said that the U.S. government's plan to base missiles in Poland ends any chance Russia could bring the country back into its sphere. The United States plans to deploy missiles in Poland and a radar system in the Czech Republic as a shield against Iran and North Korea.

• We continue to pray for the protection and safety of all former Soviet satellite countries. May God be glorified as they seek to retain their independence with our Lord's power and might! May they be blessed as they potentially lay down their lives for their friends! • "But the salvation of the righteous is from the Lord; He is their strength in the time of trouble. And the Lord shall help them and deliver them; He shall deliver them from the wicked, and save them, because they trust in Him." (Psalm 37: 39 & 40 NKJV)
Posted by Capitol Hill Prayer Partners at 1:09 AM