Iran is providing "generous" funding to help Syria beef up its forces, and those troops seem to be moving closer to the Israeli border, an Israeli daily reported on Thursday.

SEC. RICE: "We can talk [with Iran] about anything. That's an offer that I would renew today. We have, in fact, even under the circumstances, we've cooperated some in Afghanistan. And I think that was useful. So there is a different path. . . Let me just say here, publicly, the United States has no desire for confrontation with Iran, none. The option that we have is to continue to try to convince those who are reasonable in Iran that the course that they're on is destructive." 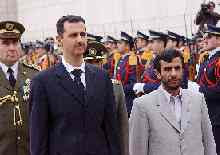 Iran faced further isolation if it failed to meet United Nations demands to curb its nuclear programme, the US's national security adviser warned on Wednesday. On the day of a UN deadline, Stephen Hadley argued that the Bush administration's concerns were shared by Russia, in spite of the split between Moscow and Washington on issues such as missile defence. "Regrettably, the Iranian regime has pursued a policy of pursuing a nuclear programme in defiance of the international community and the result is that it is increasingly isolated, he said.
Posted by Capitol Hill Prayer Partners at 9:35 PM