An article published last week in a slick Al Qaeda online magazine calls on jihadists in the Arabian Peninsula to follow a directive from Usama bin Laden and attack "oil interests that provide the Crusaders with oil." Those "interests," the article states, could also include facilities owned by Venezuela, Mexico and Canada. The article, entitled "Bin Laden and the Oil Weapon," and posted Feb. 8 in an issue of the once-dormant e-zine "Voice of Jihad," calls on the Saudi branch of Al Qaeda to strike oil-related targets, "as instructed by our [emir], Sheikh Usama bin Laden."

• Lord we rebuke every plan of the enemy, and stand against these spirits of murder and destruction. We declare that this plan against the oil shall not be successful and "no weapon formed against us shall prosper. And every tongue which rises against us in judgment we shall condemn." (Isaiah 54:17)

2. Bush Tells Congress: Stand Up for Our Troops - AP

WASHINGTON — President Bush on Wednesday lamented that the House is planning a resolution to express disapproval with the plan to deploy more U.S. forces to Iraq and said the U.S. Congress ought to do more to show its support for service members.

"Our troops are counting on their elected leaders in Washington, D.C., to provide them with the support they need to do their mission. We have a responsibility, all of us here in Washington, to make sure that our men and women in uniform have the resources and the flexibility they need to prevail," Bush told reporters in an East Room press conference.

President laments that the House is planning resolution to express disapproval with plan to deploy more troops. Bush, at a news conference, noted that, while lawmakers "have every right to express their opposition" to his Iraq policy, the House resolution disapproving his decision to send more than 20,000 additional forces to Iraq did not have the force of law. He focused instead on a vote coming soon on providing emergency funds for the war. "Our troops are counting on their elected leaders in Washington D.C. to provide them with the support they need to do their mission," he said. • Lord we ask that You intervene to bring wisdom on this vote to provide funding for our troops. We know that no human army can match the power and protection that You provide for those that love You. So we ask Your wings cover us from our enemies, and Your host of heaven be deployed against them. • "And I will encamp about My house as a guard or garrison, so that none shall march back and forth; and no oppressor or demanding collector shall over-run them, for now My eyes are upon them." (Zechariah 9:8 Amplified)

House Republicans Work to Recruit Lawmakers to Defeat Iraq Resolution House lawmakers, stressing that the world was watching, spoke passionately Wednesday on the wisdom of sending more troops to the troubled conflict in Iraq, but President Bush was already looking beyond the debate to a coming battle over troop funding. Entering the second of a four-day marathon debate on Iraq war policy, the partisan lines were clearly drawn, with rare exceptions. Democrats backed the resolution opposing the escalation of troop strength while Republicans for the most part vehemently opposed it.

• Lord we bind division and strife, and the plans of our enemies who wish to use this disunity against us. We pray for Your mercy over our nation and leadership that Your truth and power would be revealed to them. We ask for bipartisan actions that bring fresh strength and cooperation to our legislators. • "In the secret of Your presence You hide them from the plots of men; You keep them secretly in Your pavilion from the strife of tongues." (Psalm 31:20 Amp)

Sleet stung the faces of pedestrians and snow and ice coated windshields Wednesday as the Valentine's Day blizzard shut down schools and air travel and turned streets and highways into dangerous skating rinks. Nearly 300,000 homes and businesses had lost electrical service in the cold weather. At least 12 deaths were blamed on the huge storm system.

• Lord we ask assistance and comfort for those who have been affected by these storms. • "for the Lord is good; for His mercy endureth forever. . ." (Jeremiah 33:11)

5. House Hearing on "Warming of the Planet" Canceled After Ice Storm - Drudge Report

The Subcommittee on Energy and Air Quality hearing scheduled for Wednesday, February 14, 2007, at 10:00 a.m. in room 2123 Rayburn House Office Building has been postponed due to inclement weather. The hearing is entitled “Climate Change: Are Greenhouse Gas Emissions from Human Activities Contributing to a Warming of the Planet?” DC WEATHER REPORT: Wednesday: Freezing rain in the morning. Total ice accumulation between one half to three quarters of an inch. Brisk with highs in the mid 30s. North winds 10 to 15 mph...increasing to northwest 20 to 25 mph in the afternoon. Chance of precipitation near 100 percent.

• Thank You, Lord, for assisting the people of Washington DC in the midst of a paralyzing ice storm. We ask that You restore the area quickly. We cancel every curse against the planet, and cancel the curses spoken towards both sides in the warming debate. We ask that we all be good stewards of Your gift, and we speak Your peace to the earth. • "For the earth is the Lord's and the fullness thereof." (Psalm 24:1) 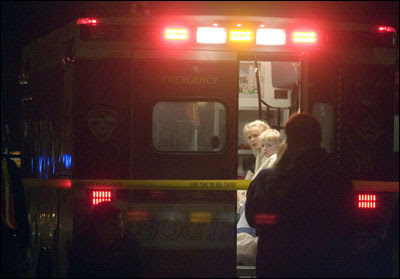 The 18-year-old gunman who killed five people in a crowded Utah shopping mall was a Bosnian Muslim refugee who was prepared to kill many more, say investigators. An off-duty police officer having an early Valentine's Day dinner with his wife was credited today with cornering Sulejmen Talovic, exchanging fire with him until other officers arrived to shoot and kill the gunman. The trench-coated teenager wanted to "to kill a large number of people" and probably would have killed many more if not for the off-duty officer, Police Chief Chris Burbank said.

• Authorities have been warning us for some time now that Islamic terrorists have planned to strike "soft targets" (churches, malls, schools) next in America. That time has now come. Please join us in prayer: • Father we ask Your peace and comfort for those families of the victims in this tragedy. We thank you for the courage of the officers involved. We also ask that You intervene in the hearts of violent people in our nation, that these outrageous acts would be quelled. • "Who brought me out from my enemies; You also lifted me up above those who rose up against me; You delivered me from the violent man." (2 Samuel 22:49)
Posted by Capitol Hill Prayer Partners at 2:11 PM