A winter storm roared into the northeastern United States on Wednesday, dumping a mixture of snow, ice, sleet and rain that caused transportation havoc and forced many schools to close. Western States including Colorado and Oklahoma also had wintry blasts.

• Dear Lord, You have created all things and You have a special purpose for these storms, the most obvious being to draw us as a nation closer to You. May we have Your grace to learn Your purpose and to withstand these bitter conditions! • "The day is Yours, the night also is Yours; You have prepared the light and the sun. You have set all the borders of the earth; You have made summer and winter." (Psalm 74: 16-17 NKJV) 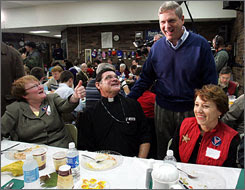 Mitt Romney, former governor of Massachusetts, came to Michigan; a state where his father, George, served three terms as governor; on Tuesday to declare his candidacy for the Republican presidential nomination.

Positioning himself as an "outsider running against Washington," Romney, 59, made only passing references to abortion and same-sex rights, issues that he campaigned on in Massachusetts. He also dropped a description of Americans as "God-fearing" that was included in his prepared text. Trying to capture his party's presidential nod in a nominating process dominated by social conservatives, he said: "I believe family is the foundation of America — and that it needs to be protected and strengthened. I believe in the sanctity of human life." If elected, Romney would become the nation's first Mormon president.

• Gracious Father, we ask that Mitt Romney and his family will come to know You as their Savior and not hide their allegiance to You! May we all remember that power and position are not the important things in life. Following You is the most important thing!
• As Jesus said: "For what profit a man if he gains the whole world, and loses his own soul? For whoever is ashamed of Me and My Words in this adulterous and sinful generation, of him the Son of Man also will be ashamed when He comes in the glory of His Father with the holy angels." (Mark 8:36, 38 NKJV)

The United States ran a record trade deficit in 2006 for the fifth consecutive year, the Census Bureau reported Tuesday, in an announcement that quickly reignited the dispute between the White House and Democrats over the value of past and future deals as well as trade barriers. The trade deficit, or gap between what the United States sells abroad and what it imports, reached a new high of last year of $763.3 billion, a 6.5 percent increase over the year before.

• We pray for WISDOM for the Congress and the President as they deal with these import/export issues, existing and potential trade agreements and the impact this all has on our trading capabilities as a nation! May this not become a polarized and politicized debate. May You be glorified in this, and we also humbly pray that America will again become an importer and exporter of Your Good News to the whole world! • The prophet Amos prophesied during a time of unprecedented prosperity in Israel. Our leaders would do well to follow his Word from the Lord: "Can two walk together, unless they are agreed?" (Amos 3: 3 NKJV)

4. North Korea Agrees To Shut Down Nuclear Facilities Within 60 Days - All Headline News

North Korea has reached an agreement with the U.S. and four other nations to shut down its nuclear-related facilities within 60 days in exchange for 50,000 tons of heavy fuel oil or other aid, a Chinese diplomat announced on Tuesday. Although the agreement leaves it undecided as to when the actual removal of North Korea's nuclear weapons - that the country may have stockpiled - will take place, diplomats see it as a significant step forward.

5. US: Anti-American Cleric Has Fled Iraq For Iran - Jerusalem Post

Anti-American cleric Muqtada al-Sadr fled Iraq for Iran ahead of a security crackdown in Baghdad and the arrival of 21,500 US troops sent by President George W. Bush to quell sectarian violence, a senior US official said.

• We praise You, God, that You have begun the vanquishing of Your Middle Eastern foes! Thank You for the upcoming troop surge in Iraq that is already working! May the Democratic Congress no longer hurt our nation or President Bush with non-binding anti- war resolutions. • "He who sits in the heavens shall laugh; the Lord shall hold them in derision." (Psalm 2:4 NKJV)

Americans would be in danger if the United States harms Islamic Jihad leader Ramadan Shallah, a senior official in the group said Tuesday, after Washington offered up to $5 million for the arrest of Shallah.

• Isaiah declares that the Lord will comfort His people in their times of need. May Ramadan Shallah be brought to justice. Beware of falling into the hands of the living Lord, Islamic Jihad! • "Behold, the nations are as a drop in a bucket, and are counted as the small dust on the scales. He brings the princes to nothing; He makes the judges of the earth useless." (Isaiah 40: 15, 23 NKJV)

The 18-year-old gunman who killed five people in a crowded Utah shopping mall was a Bosnian Muslim refugee who was prepared to kill many more, say investigators.

An off-duty police officer having an early Valentine's Day dinner with his wife was credited today with cornering Sulejmen Talovic, exchanging fire with him until other officers arrived to shoot and kill the gunman. The trench-coated teenager wanted to "to kill a large number of people" and probably would have killed many more if not for the off-duty officer, Police Chief Chris Burbank said.

• Officials have been warning us for sometime now that Islamic terrrorists would be attacking "soft targets" (schools, malls, churches and synogogues) next. Now it has begun. Lift up mighty prayer that every hidden thing about Sulejmen Talovic would be revealed, and that his entire network of friends and "teachers" would be found out. Pray for those who now mourn the five shoppers who died needlessly Monday night in Salt Lake City, Utah. • "For there is nothing hidden which will not be revealed, nor has anything been kept secret but that it should come to light." (Mark 4:22)
Posted by Capitol Hill Prayer Partners at 11:26 PM