Hezbollah head Hassan Nasrallah has said it is no secret that Iran is aiding Hezbollah by sending money and weapons via Syria.

British Prime Minister Tony Blair said in a radio interview for broadcast Monday that there likely would be progress in the Middle East peace process over the next few weeks. 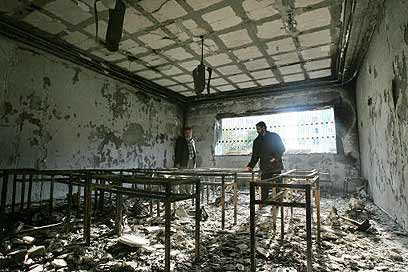 Hamas operatives in Gaza completely destroyed Fatah’s security headquarters in the Gaza Strip, at the height of another day of inter-factional violence in the Palestinian Authority.

4. Peres: Israel must not intervene in Palestinian infighting in Gaza - Ha'aretz

Vice Premier Shimon Peres on Sunday said Israel must not intervene in the internal Palestinian fighting in the Gaza Strip, saying that to do so would risk uniting the feuding Palestinians against it.

Islamic terror cells in Britain have been instructed to carry out a series of kidnappings and beheadings of the kind allegedly planned by the nine terrorist suspects arrested in Birmingham last week.

The Iraqi government said Sunday that half the Sunni Muslim militants behind the bombings shaking the country had arrived through neighboring Syria.

Israeli police were deployed in force against the threat of violence in Jerusalem's Old City on Tuesday as renovation work began outside the Temple Mount. Outraged Palestinians are rallying to protect the al Aksa Mosque.