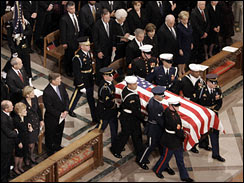 A Proclamation by the President of the United States of America

IN WITNESS WHEREOF, I have hereunto set my hand this twenty eighth day of December in the year of our Lord two thousand six, and of the Independence of the United States of America the two hundred and thirty-first.