U.S GENERALS IN CHARGE OF IRAQ TO BE REPLACED SOON 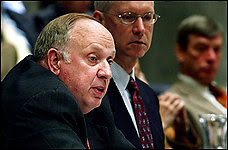 • May the Lord give the new leaders, mentioned below, godly wisdom, fresh vision and direction as they assume their new responsibilities.

John Negroponte, the nation’s first director of national intelligence, will leave his office after only 19 months. He will take a diplomatic post as deputy secretary of state. President Bush personally asked Mr. Negroponte to take on the post last month. Senior administration officials said that Sec. of State Condoleezza Rice wants Mr. Negroponte to focus on China, North Korea and Iraq. Taking Negroponte’s place will be retired Navy Vice Adm. J. Michael McConnell, who was director of the National Security Agency from 1992 to 1996. (NYT)

Gen. George W. Casey Jr. , the top American military commander in Iraq, will be replaced by Lt. Gen. David H. Petraeus as part of a broad revamping of the military team that will carry out the administration’s new Iraq strategy. President Bush has also decided to name Adm. William J. Fallon as the replacement for Gen. John P. Abizaid as the head of the Central Command, which is managing simultaneous ground wars in Iraq and Afghanistan.

In addition to the military changes, Mr. Bush intends to appoint the U.S. ambassador to Iraq, Zalmay Khalilzad, as the new United States ambassador to the United Nations.