Twelve years of Republican congressional control ended at noon Thursday when the election of new members ushered in an era of Democratic rule - beginning with a fortnight of action on an agenda ranging from raising the minimum wage to expanding funding for embryonic stem cell experimentation.

• As humans, we can never be totally sure of the future; only God knows our path. We must never be frightened of things that God allows to happen for His purposes and His Glory! We must always remember to turn to Him for everything! • "Therefore take up the whole armor of God, that you may be able to withstand in the evil day, and having done all, to stand." (Ephesians 6: 13 NKJV) 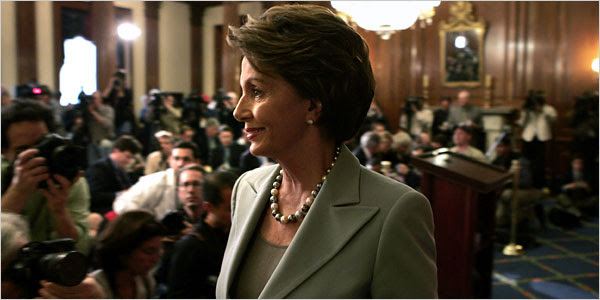 According to Rev. Louis Sheldon, TVC chairman, Pelosi plans to attack the First Amendment right of conservative groups to freely lobby Members of Congress. Her plan is part of the Democrats' "lobby reform" legislation that she hopes to push through Congress. "Rep. Pelosi, a pro- abortion, pro-homosexual, anti-military legislator, is working with the leftist Public Citizen group to craft a bill that specifically targets conservative groups -- but leaves labor unions, corporations, and even foreign interests to freely lobby Congress," Sheldon said in a message to supporters. "The legislation will be a serious violation of the Constitution by undermining free speech and placing incredible time and financial burdens on grassroots organizations. This will infringe upon the right of the people to petition their government," he warned.

• May we seek wisdom in all we do! Pray for Speaker Pelosi that she will inquire of the Lord on how to lead the U.S. House of Representatives. • "When wisdom enters your heart, and knowledge is pleasant to your soul, discretion will preserve you; understanding will keep you, to deliver you from the way of evil, from the man who speaks perverse things, from those who leave the paths of uprightness to walk in the ways of darkness; who rejoice in doing evil, and delight in the perversity of the wicked." (Proverbs 2: 10-14 NKJV)

This year promises to be the world's warmest on record thanks to global warming and El Nino, Britain's Meteorological Office said Thursday.

• Praise God that only He knows what tomorrow brings, weather included! • "A man's heart plans his way, but the Lord directs his steps." (Proverbs 16: 9 NKJV)

Germany on Monday took over the rotating presidency of the European Union, embarking on a six- month drive to revive the expanded bloc's stricken constitution and strengthen its ties to energy-rich Russia and Central Asia.

• When man's laws confront God's Laws we know who wins! May the Lord be sought by Germany to help them lead the EU and preserve it's Constitution, and may America's Constitution be preserved in light of the Democratic majority of the 110th Congress. • "The law of the Lord is perfect, converting the soul; the testimony of the Lord is sure, making wise the simple." (Psalm 19: 7 NKJV)

• Stemming demonic aggression can only happen with God's intervention and divine protection. • "Then the Lord said to Moses, 'Stretch out your hand over the sea, that the waters may come back upon the Egyptians, on their chariots, and on their horsemen.' And Moses stretched out his hand over the sea; and when the morning appeared, the sea returned to its full depth, while the Egyptians were fleeing into it. So the Lord overthrew the Egyptians in the midst of the sea. . . Not so much as one of them remained. Thus Israel saw the great work which the Lord had done in Egypt; so the people feared the Lord, and believed the Lord and His servant Moses." (Exodus 14: 26-28;31 NKJV)

Iraq was named Wednesday, January 3, as the world's "second-worst persecutor of Christians" after North Korea in an influential report expected to underscore concern about sectarian violence in the war-torn county.

• May Iraq be convicted of her sins against the Church! As the Apostle Paul wrote to his charge Timothy, even he could be restored by Christ after persecuting the saints.
• "And I thank Christ Jesus our Lord who has enabled me, because He counted me faithful, putting me into the ministry, although I was formerly a blasphemer, a persecutor, and an insolent man; but I obtained mercy because I did it ignorantly in unbelief." (1 Timothy 1: 12-13 NKJV)

The timing of the announcement has not been set, but rumors about Khalilzad have been floating since Bolton announced last month that he would submit his resignation and leave the world body when his temporary appointment expired at the end of the last Congress.

• Lift up President Bush, asking our Lord to turn his heart in this nomination in the direction of righteousness. The man or woman who serves our nation as our Ambassador to the United Nations -- the gate of the nations -- MUST be one whose God is the God that our nation serves: the God of Abraham, Isaac, and Jacob, and no other. • "The king’s heart is in the hand of the LORD, Like the rivers of water; He turns it wherever He wishes." (Prov. 21:1)

Posted by Capitol Hill Prayer Partners at 1:56 AM