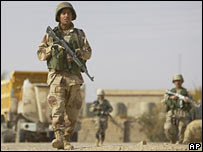 Iraqi soldiers, backed by U.S. troops and air power, launched a major raid against a radical Shiite cult, known as "Soldiers of Heaven," in Najaf over the weekend that resulted in a 24-hour gun battle. When the fighting stopped, more than 100 terrorists had been captured, and, according to Iraqi officials, twice that number had been killed. Among the dead were Afghans and Saudis. Iraqi officials also said that Sunnis loyal to Saddam Hussein were involved in the plot.

These were not "run of the mill" thugs, but terrorists with a purpose, plotting to assassinate leading Shiite clerics, including the spiritual leader of Iraq's majority Shiite population, Grand Ayatollah Ali al- Sistani, during a pilgrimage on one of the major Muslim holy days.

This was a major victory for the Iraqi security forces, which took the lead in the fight. It also represented a victory for the United States, because the operation worked exactly as it should have - Iraqi forces in front, with U.S. forces providing support. The major media, however, have virtually ignored the battle. In fact, ABC's Evening News last night led off with the story of Barbaro, the champion racehorse that had to be euthanized due to an injury.

For those wondering why a Shiite cult would want to assassinate Shiite clerics, there's another story here that you won't read about in the major media. The "Soldiers of Heaven" believe that through violence and chaos they can force the return of a Muslim messiah, who will purge the world of "infidels."

Notable followers of this apocalyptic strain of Islam include Iranian President Mahmoud Ahmadinejad, who has said repeatedly that Israel would be "wiped off the map" and that the United States would "soon cease to exist." Today's Washington Times reports that Iran and North Korea are cooperating in the development of an intercontinental ballistic missile capable of hitting the United States. The Pentagon estimates Iran could possess such a missile in the next seven years. That is why Ahmadinejad is working so feverishly to develop nuclear technology - not for energy production, but to fulfill a radical religious obligation to bring about Armageddon.