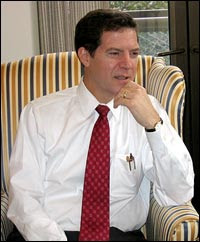 U.S. Senator Sam Brownback today reintroduced the Unborn Child Pain Awareness Act, which would require those who perform abortions on unborn children 20 weeks after fertilization to inform the mother seeking an abortion of the medical evidence that the unborn child feels pain. The bill, first introduced in the 109th Congress, has 27 co- sponsors.

• Pray that those who have been affected by an abortion decision and regretted it will be the strongest supporters of this bill and other measures to overturn Roe. Vs. Wade and other pro-abortion rulings by the Supreme Court. Pray the curse of death off our nation. • So you shall not pollute the land where you are; for blood defiles the land and no atonement can be made for the land, for the blood that is shed on it, except by the blood of him who shed it. Therefore do not defile the land which you inhabit, in the midst of which I dwell; for I the Lord dwell among the children of Israel.' (Numbers 35:33, 34)

Mimicking the hijackers who executed the Sept. 11 attacks, insurgents reportedly tied to al Qaeda in Iraq considered using student visas to slip terrorists into the United States to orchestrate a new attack on American soil. Lt. Gen. Michael D. Maples, head of the Defense Intelligence Agency, recently testified that documents captured by coalition forces during a raid of a safe house believed to house Iraqi members of al Qaeda six months ago "revealed [AQI] was planning terrorist operations in the U.S." (For full report, go here:)

• Pray that whatever plans the terrorists have made will not succeed but they will fall into their own traps! Hallelujah! Amen! • "The nations have sunk down in the pit which they made; in the net which they hid, their own foot is caught. The Lord is known by the judgment He executes; the wicked is snared in the work of his own hands." (Psalms 9:15,16)

Al-Maliki has backed away from supporting Muqtada al-Sadr's Mahdi Army after U.S. intelligence reported infiltration by death squads. Violence in Iraq over the weekend claimed more than 100 lives.

• Pray Al-Malili will remain faithful to U.S. and will take strong measures to route out the warring militias in Iraq. In the name of Jesus we bind the spirit of violence and death in Iraq and loose the peace of the Lord and the gospel of Jesus Christ into the country! Amen! • "Therefore God also has highly exalted Him and given Him the name which is above every name, that at the name of Jesus every knee should bow, of those in heaven, and of those on earth, and of those under the earth, and that every tongue should confess that Jesus Christ is Lord, to the glory of God the Father." (Philippians 2:9,11) 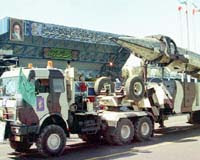 Iran conducted missile tests Monday as its leadership stepped up warnings of possible military confrontation with the United States. Hard-liners said an American attack would spark "hell" for the U.S. and Israel, with some threatening suicide attacks against U.S. forces. The drum-beating suggests Iran does not intend to back down as tensions mount on both fronts of its confrontation with the United States and the West — the nuclear issue and the turmoil in neighboring Iraq. See Headlines inside Iran and Regional Perspective.

• Pray that in the name of Jesus every wicked plot that Iran has will be bound from doing any harm and call forth the nations of the world to join in agreement to cut off Iran from its evil plans. Pray for the Lord’s harvesters to be plentiful in the Middle East and especially Iran and Iraq. • "Arise, O Lord, Do not let man prevail; Let the nations be judged in Your sight." (Psalm 9:19)

5. China Blows Up Its Own Satellite - Aviation Week

China blasted one of its own satellites with a ballistic missile last week, proving it has at least some proficiency at space warfare. The only other countries to have developed anti-satellite weapons are the United States and the former Soviet Union.

• As potential warfare reaches a "new level" in outer space, ask our Lord to grant His Body renewed strategies for "spiritual warfare" here on earth. He IS able! • "Call upon Me and I will show you great and mighty things which you know not." (Jer. 33:3)

California's Central Valley was the hardest hit, and economists say the full impact won't be felt until the spring. The deep freeze could cost thousands of people their jobs and erase drain hundreds of millions of dollars from the area's agriculture-intensive economy, local employers say. As many as one of five workers in the Central Valley is directly or indirectly dependent on agriculture.

• Pray that as we go through these catastrophes, we will keep God at our center as our source and consolation – for He will Restore us! • "You have allowed me to suffer much hardship, but you will restore me to life again and lift me up from the depths of the earth. You will restore me to even greater honor and comfort me once again." (Psalms 71:20,21) (LTD)