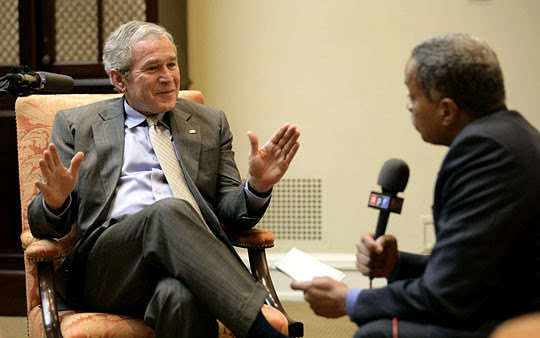 In an interview Tuesday with NPR, President Bush stated, "The Iraqis are beginning to take the lead. . . Our job is to help them. I'm hopeful the decision I've made is going to yield enough results so that the Iraqi government is going to take more of the responsibility. . . it is in our interest to help them, with an additional 21,000 troops, particularly in Baghdad."

• Lord we pray Your wisdom will prevail over all of our President's decisions regarding Iraq. We ask for stability in Iraq, and that You keep its fledgling democracy from crumbling or becoming an ally of evil. • "He rules by His power forever, His eyes behold the nations; let not the rebellious exalt themselves." (Psalm 66:7)

2. Lawmakers in Battle Over War Powers on Iraq - Fox News

The new Democratic-led Congress is on a collision course with the White House over how far lawmakers can or should go to stop the war in Iraq, a dispute that could test the bounds of the Constitution.

• Lord we bind the spirit of division in our Congress. We ask that You visit all of our lawmakers with truth and wisdom, and that both parties will work together with the President for the best interests of our nation. • "Now I beseech you, brethren, by the name of our Lord Jesus Christ, that ye all speak the same thing, and that there be no divisions among you; but that ye be perfectly joined together in the same mind and in the same judgment." (1 Cor 1:10)

• Offer praise for this breakthrough and continue to hover over all of these talks in prayer. God will make a way where there seems to be no way for our leaders to agree on the correct policy to bring victory in the war in Iraq. • "For nothing is impossible with God." (Luke 1:37)

President Bush said Monday the United States "will respond firmly" if Iran escalates military action in Iraq and endangers American forces. But Bush emphasized he has no intention of invading Iran.

• Lord, let the evil regime of Iran fall, and may every secret plan devised by they or their allies be destroyed from the inside out. • "Let my adversaries be clothed with shame; and let them cover themselves with their own confusion, as with a mantle." (Psalm 109:29)

Within a year, the U.S. missile defense system should be able to guard against enemy attacks, while testing new technologies, the deputy director of the U.S. Missile Defense Agency said on Monday.

• Lord we pray that this missile defense system will be effective, move along quickly, and fall within budgetary allowances. We ask Your protection over it, while standing firmly on You alone as our true refuge from attacks. • "Some trust in chariots, and some in horses; but we will remember the name of the Lord our God." (Psalm 20:7)

. . . Are you a Believer??
The Bush administration is proposing a $200 million grant program to help law enforcement agencies respond to surging violent-crime rates in cities across the nation, Justice Department officials said Monday. The program would help local and state police agencies pay for officers' overtime, equipment and other expenses stemming from new regional task forces aimed at curbing violent crime.

• Lord thank You for a proposal to assist law enforcement agencies. We ask that You watch over it to be administered wisely. We also ask that Your Holy Spirit move over our cities to change the hearts of violent people. • "He shall redeem their soul from deceit and violence . . ." (Psalm 72:14a)

Those small donations of time are adding up: More Americans than ever before are volunteering. In 2005, 29 percent of adults were serving – a 30-year high, according to a December report by the Corporation for National and Community Service (CNCS).

• Thank you, Lord, for so many people who are willing to give up time and energy to volunteer. Father, let Your Holy Spirit move on these and others to bring about the answers to issues that have gone unmet within our nation. Let the world see that the works of Your Spirit in the lives of people can make a difference far above expensive government programs. • "Even so faith, if it hath not works, is dead, being alone." (James 2:17)
Posted by Capitol Hill Prayer Partners at 11:39 PM