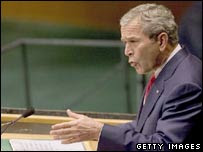 • Pray the Lord's will in all action plans over Iraq. Pray for our new military leadership team to have wisdom and strength in the way the Lord would lead. • "Thus saith the LORD, the Redeemer, the Holy One of Israel; I am the LORD thy God which teacheth thee to profit, which leadeth thee by the way that thou shouldest go." (Is. 48:17)

President Bush will name a new intelligence chief Friday morning during the official announcement that his current top spy man is stepping down. At a press conference this morning, Bush appeared with Negroponte and former National Security Agency Director Mike McConnell, a retired Navy vice admiral, who will be tapped as his replacement.

[Please see our special article on this news from Intercessors for America, below.]

• Pray for the National Security Agency to be of one mind for the protection of the United States. Pray for the authority to do their job well and also for insightful intelligent reports that will uncover destructive plans. • Praise the Lord, for He alone makes us to rest and dwell in safety. But know that the LORD hath set apart him that is godly for himself: the LORD will hear when I call unto him. I will both lay me down in peace, and sleep: for thou, LORD, only makest me dwell in safety. (Psalm 4:3)

In a day of ceremony and historic change, Rep. Nancy Pelosi became the nation's first female House speaker on Thursday as Democrats eagerly took control of Congress for the final two years of President Bush's term.

• Pray for Congress to listen to godly counselors. Pray for them to have a teachable spirit to seek out truth. • "There are many devices in a man's heart; nevertheless the counsel of the Lord, that shall stand." (Prov. 19:21)

President Bush says he and other government officials have the power to open your mail without a judge's warrant. Bush made the claim last month in a signing statement attached to a postal reform bill. Bush wrote that the bill "provides for opening of an item of a class of mail otherwise sealed against inspection."

White House spokeswoman Emily Lawrimore said today that the signing statement was meant merely "to clarify that he already has the authority" to open mail in certain emergencies. "The president is not claiming any 'new authority,'" the White House said in a new statement. "The signing statement merely recognizes a legal proposition that is totally uncontroversial: that in certain circumstances -- such as with the proverbial 'ticking bomb' -- the Constitution does not require warrants for reasonable searches." Lawrimore said such presidential power would not infringe upon Americans' privacy, because it "would only be used in extraordinary circumstances."

• Lord, we pray for truth and integrity to rule in mail inspection. We ask for protection and for all evil to be exposed. Thank You for the authority for reaonable searches and we ask You to protect that authority. • "Let integrity and uprightness preserve me; for I wait on thee." (Ps. 25:21)

North Korea appears to have made preparations for another nuclear test, according to U.S. defense officials.

• Make declaration to the Lord; Unto thee, O LORD, do I lift up my soul, O my God, I trust in thee; let me not be ashamed, let not mine enemies triumph over me. • "And the LORD shall help them, and deliver them: he shall deliver them from the wicked, and save them because they trust in him." (Ps. 37:40)

The aircraft carrier USS John C. Stennis is scheduled to leave the United States this month for the Gulf region in a Naval buildup aimed partly as a warning to Iran.