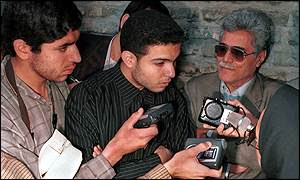 Iranian Jews are ignoring urgent warnings by American Jewish community leaders and the Hebrew Immigrant Aid Society (HIAS) that they should quit the Islamic Republic.

The campaign to convince Iran’s 25,000 Jews to flee for their lives has stalled. According to statistics compiled by HIAS, only 152 Jews left Iran in the period between October 2005 and September 2006, down 40 percent from the number of Jews who had fled the Islamic Republic in the same period in 2004- 5. The year before that only 183 Jews left Iran.

Sources said those Jews who left Iran in the past several years cited economic and family concerns as their primary reasons for leaving – not political considerations.
Israel National News http://www.israelnationalnews.com/news.php3? id=119235