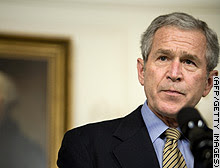 ..
President Bush denounces House Democrats who pushed through a spending bill that includes a deadline to pull out of Iraq.

President calls bill that would dole out funding in installments unacceptable; GOP hopes for compromise in Senate.

· Continue in prayer over this issue, which has now become a political football. Ask our Lord to show His mercy to our nation, even as our men are dying on the field of battle while this drama unfolds in Washington. Pray that the hoped-for compromise bill in the Senate would be passed quickly; that the House would come into alignment with the Senate; and that the President would be given a bill he CAN sign to continue to fund the war in Iraq. · " . . . if two of you agree on earth concerning anything that they ask, it will be done for them by My Father in heaven." (Matthew 18:19)

A leader in the national movement to promote abstinence education is asking Southern Baptists to contact their elected officials and voice their support of federally funded abstinence programs as Congress considers whether to renew the $50-million-a-year grants that expire in June.

· Pray for this movement to receive mass support. Pray for the programs to be renewed financiaily. Pray that this Biblical education will be anointed of the Lord to start a revolution in this generation. Pray this generation will rise up and love the Lord and walk in purity.

Jurors convicted a Chinese-born engineer Thursday of conspiring to export U.S. defense technology to China, including data on an electronic propulsion system that could make submarines virtually undetectable.

· Thank You, Lord for exposing and bringing to justice this thief and this traitor. We pray protection of all top secret information. We ask You to continue to expose conspiracies and crimnal acts against our nation. In Jesus' Name, amen. · "Justice and judgment are the habitation of thy throne: mercy and truth shall go before thy face. And they shall no more be a prey to the heathen, neither shall the beast of the land devour them; but they shall dwell safely, and none shall make them afraid." ( Ps. 89:14, Ezel. 34:28)

Over the past year, multiple international conferences have featured leaders of the anti-global left and Islamist groups working together. Go to any anti-war or anti-globalization demonstration in the West and chances are you will see the flags of Hezbollah and Hamas waved by people wearing Che Guevara T- shirts. And at some of these meetings, members of such radical Islamist groups as the Muslim Brotherhood, Hamas, and Hezbollah have enjoyed starring roles.

· Lord, we continue to declare that our trust is in You. Reports of increasing evil rising against us will not sway our resolve to see Your kingdom come. We pray for Your right hand of power to rise up and save us from all our enemies. We pray for Your name to go forth as the only one true God. · "Show thy marvelous lovingkindness, O thou that savest by thy right hand them which put their trust in thee from those that rise up against them. Keep me as the apple of the eye; hide me under the shadow of thy wings, From the wicked that oppress me, from my deadly enemies who compass me about." ( Ps, 17:7- 9)

Defense Secretary Robert M. Gates yesterday told Congress that al Qaeda will establish a stronghold in Iraq's Anbar province if U.S. troops pull out prematurely and that the group is reacting to the war debate in Washington by stepping up attacks.

· Pray for a united vision and plan for Iraq. Pray for one nation under God to stay the course for victory in Iraq. Pray for our leaders to understand that the aggression of these attacks is evidence of the enemies' united vision for destruction. · "His heart is established, he shall not be afraid, until he see his desire upon his enemies. Behold how good and how pleasant it is for brethren to dwell together in unity! . . . . : for there the LORD commanded the blessing, even life for evermore." ( Ps. 112:8, 133:1,3b)

6. Hizbullah training for attacks on US - Telemundo; Ynet News

Hizbullah has set up a training facility in South America as part of its plan to launch terror attacks against the United States, the American Spanish- language Telemundo television network reported. · Father, as our enemies have increased, we pray for the fear of the Lord that turns us toward righteousness. We ask for divine protection from all our enemies. We pray for these plans of Hizbullah to come to nothing. · "And who is he that will harm you, if ye be followers of that which is good? So shall they fear the name of the LORD from the west; and his glory from the rising of the sun. When the enemy shall come in like a flood, the Spirit of the LORD shall lift up a standard against him." (I Peter 3;13, Is. 59:19)

President Vladimir Putin of Russia obliquely compared the foreign policy of the United States to the Third Reich in a speech Wednesday commemorating the 62nd anniversary of the defeat of Nazi Germany, in an apparent escalation of anti-American rhetoric within the Russian government.