"He has brought back their wickedness upon them and will destroy them in their evil. (Psalm 94:23)

1. Iran's secret plan for summer offensive to force US out of Iraq - UK Guardian 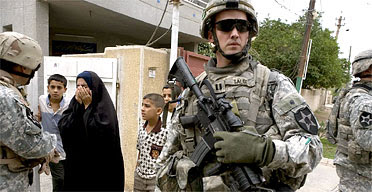 Iran is secretly forging ties with al-Qaida elements and Sunni Arab militias in Iraq in preparation for a summer showdown with coalition forces intended to tip a wavering US Congress into voting for full military withdrawal, US officials say.

Syria has agreed to supply Iran with at least 10 out of 50 air defense systems that Damascus is in the process of buying from Russia, Jane's Defense Weekly reported in this week's edition.

. . . the future is coming . . .
Iran continues to report progress in its uranium enrichment program. Iran has installed 1,600 gas centrifuges to produce enriched uranium. Officials said this marked an increase of 300 centrifuges over the last three weeks.

Iran has been procuring and developing a range of cruise missiles to prepare for war with the United States.

A study by the Marshall Institute asserted that Iran has made a major investment in cruise missiles in an effort to bolster military capabilities. The report, entitled 'The Cruise Missile Challenge: Designing a Defense Against Asymmetric Threats,' said Iran has obtained technology, expertise and components from China and Russia.

Iran is devoting additional resources to anti-ship cruise missile development and production toward the goal of modernizing its naval forces for potential employment in possible conflicts over control of Straits of Hormuz and U.S. and Western naval access to the Gulf region in general, the report authored by Jeff Kueter and Howard Kleinberg, said.

The report said Iran has deployed such Chinese- origin cruise missiles as Silkworm, Seersucker and the advanced Saccade. The institute also cited Iranian procurement of the Russian-origin AS-15 Kent, termed a thermonuclear-warhead-capable strategic cruise missile. The Kent was said to have been exported by Ukraine.

Inspectors for the International Atomic Energy Agency have concluded that Iran appears to have solved most of its technological problems and is now beginning to enrich uranium on a far larger scale than before, according to the agency's top officials
Posted by Capitol Hill Prayer Partners at 9:02 PM