1. Illegal Terror Suspects Bit The Hand That Fed Them - AP

The three Duka brothers - among 6 charged in GI murder plot - lived illegally as Americans for 23 years, then turned.

· Lord we gratefully pray that You will continue to reveal and rout all participants and plots of our enemies before they come to fruition. · "Keep me from the trap which they have laid for me, and the snares of evildoers." (Psalm 149:9)

...Video: Six arrested in terror plot against Fort Dix
The FBI knows the identity of four men who took part in jihadist training exercises in Pennsylvania's Pocono Mountains last year along with six others who are now under arrest for an alleged terrorist plot, but they have insufficient evidence to charge the four at this stage.

· Father we pray that solid evidence will be revealed which will allow our enemies to be brought to justice. · "Righteousness and justice are the foundation of Your throne." (Psalm 89:14a)

Nature's fury made life miserable Wednesday from one end of the nation to the other, with people forced out of their homes by wildfires near both coasts and the Canadian border and by major flooding in the Midwest. 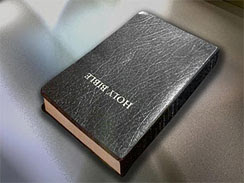 If North Carolina is going to let people use a religious text when taking an oath in court, the Bible should not be the only book allowed, an attorney for the American Civil Liberties Union argued in court Tuesday.

· Lord our nation was founded upon You and You alone. We rebuke this spirit of political correctness, and declare that America still belongs to the one true Living God by the Blood of Jesus! We ask that you frustrate the plans of the ACLU and bring them to shame in this fight. · "Let them be clothed with shame and dishonour who magnify and exalt themselves against me!" (Psalm 35:26b)

5. Dozens of States Sign on to Climate Change Registry - CNSNews.com

Creating what they call the largest national effort to take action on climate change, 31 states this week joined a registry designed to track greenhouse gas emissions. But a conservative critic questioned whether any future agreements reached by the participating states would adhere to the U.S. Constitution. Myron Ebell, director of Energy and Global Warming Policy at the Competitive Enterprise Institute, cautioned that the Constitution "does not allow the states to engage in agreements between themselves without the express approval of Congress, so on the face of it, these agreements are unconstitutional." The Climate Registry will begin accepting data in January 2008.

· Father we ask that wisdom and change of heart prevail over these plans of the states to circumvent the federal government. We pray that all aspects of their consequences and wrong side-effects would be made clear. We again bind the spirit of fear over climate change and speak peace to the people.

Churches in five big U.S. cities say they'll become sanctuaries for illegal aliens threatened with deportation, and many more churches across the country are expected to join the effort, the Associated Press reported.

· Father we stand in repentance for our brethren who have not seen the full aspect of the problems in immigration, and have bought the lies of the worldly system. You are the God who sees all things and knows the hearts of men; turn our hearts to Your ways. Bring justice and truth to our nation and to those who illegally enter her.

· "Yet they seek Me daily, and delight to know My ways, as a nation that did righteousness, and forsook not the ordinance of their God; they ask of Me the ordinances of justice; they take delight in the approaching to God." (Isaiah 58:2)