1. Olmert: I have no intention of making any deal with Hamas - Jerusalem Post

..Chairman Mahmoud Abbas, PM Ehud Olmert and US Secretary of State Condoleezza Rice greet each other at last month's trilateral meeting in Jerusalem. Photo: AP [file]
"I have no intention of making any agreement with Hamas or the Islamic Jihad to stop the rocket fire from Gaza towards Sderot and other western Negev neighborhoods," Prime Minister Ehud Olmert told the Knesset on Tuesday.

The pressure on the Hamas and Islamic Jihad terror organizations in Gaza must be increased, but we cannot launch another Operation Defensive Shield, Transportation Minister and former IDF Chief of Staff Shaul Mofaz is expected to tell the national security cabinet on Wednesday.

Rocket attacks on Israel will continue despite the army's ongoing offensive against gunmen in the Gaza Strip, Hamas' exiled politburo chief Khaled Mashaal told The Guardian.

Heavily armed foreign jihadists have been entering Lebanon from Syria from around the time Western authorities noticed a drop in the infiltration of foreign fighters from Syria to Iraq, Lebanese officials say. 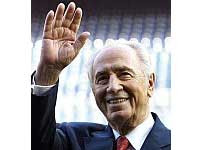 Israeli Vice Premier Shimon Peres officially announced his candidacy for president on Wednesday morning at a special meeting of the Kadima faction in the Knesset.