Senate leaders agreed Monday that they would wait until June to take final action on a bipartisan plan to give millions of unlawful immigrants legal status. The measure has drawn criticism from across the political spectrum. In a nod to that opposition, Senate leaders won't seek to complete it before a hoped-for Memorial Day deadline.

"It would be to the best interests of the Senate ... that we not try to finish this bill this week," said Senate Majority Leader Harry Reid (news, bio, voting record), D-Nev., as the chamber began debate on the volatile issue. "I think we could, but I'm afraid the conclusion wouldn't be anything that anyone wanted." The vote is now scheduled to take place sometime in June,

· OFFER GREAT PRAISE FOR THIS NEWS, FOR THIS REPORT IS A DIRECT ANSWER TO OUR INTERCESSION THAT THE CONGRESS WOULD SLOW DOWN AND TAKE A VERY CAREFUL LOOK AT THIS BILL BEFORE VOTING ON IT. PRAISE THE LORD! · ""He that answers a matter before he hears it, it is folly and shame unto him." (Prov. 18:13)

A week after touting a breakthrough bipartisan agreement on immigration, lawmakers now are trying to change key provisions.

3. Deal Near to Fund Iraq War Without Troop Withdrawal - AP

Congressional leaders indicated Tuesday that a compromise is near over how to fund U.S. troops serving in Iraq and Afghanistan after Democrats confirmed they will abandon plans to include a troop withdrawal timetable in the war supplemental spending measure.

· THIS IS ANOTHER DIRECT ANSWER TO PRAYER. PRAISE GOD! Now, as David took his slingshot and slew Goliath with a stone (the "rock" of Christ), trust God to do the same, through our prayers, with the Goliath of opposition to a war funding bill that includes a timetable for withdrawal -- surrender -- from Iraq. · " . . . strong is he who carries out His word." (Joel 2:11)

... U.S. Army Spc. Dan Seitz of Pensacola, Fla., is among the troops from the 10th Mountain Division, which is missing three soldiers after a May 12 ambush and abduction in Quarghuli, Iraq. (AP)

U.S. forces broadened their hunt yesterday for three missing comrades beyond the rural area south of Baghdad where they disappeared, and their top commander expressed optimism that at least two of them were still alive a week after their isolated outpost was ambushed.

· Nothing is hidden from You Lord and so we pray that these missing soldiers will be found quickly and safely. We pray for encouragement in this situation and safety for our soldiers and all coalition members in Iraq and Afghanistan. · For the oppression of the poor, for the sighing of the needy, Now I will arise," says the Lord; "I will set him in the safety for which he yearns." (Psalms 12:5) 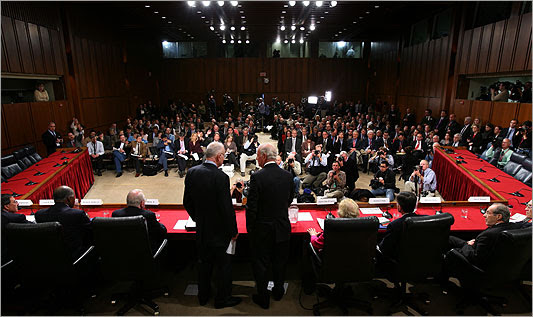 · We pray that our leaders will take everything into consideration when seeking answers for our military engagement in Iraq and Afghanistan. Allow our leaders to only enact those things that are Your will. · "Lord, You will establish peace for us, for You have also done all our works in us." (Isaiah 26:12)

Both Iranian and American officials said Thursday that the talks, beginning May 28 in Baghdad, will be limited to the security situation in Baghdad and will not delve into the diplomatic deadlock between the two countries over Iran's nuclear program. "It is not about U.S.-Iranian relations. It's about how direct contact between us can help the situation inside Iraq," said the U.S. Ambassador to Iraq, Ryan Crocker, who will lead the talks. "There is an opportunity here for them, I think, to move into a whole new era in a relationship with a stable, secure, democratic Iraq that threatens none of its neighbors, including Iran," Crocker said. "But to get there, they need to start doing some more constructive things than they have."

· Lord, we pray for this new era of peace between Iran and Iraq. Guide everyone involved in negotiating and do not allow the past to hinder these talks.Grant Your unusual wisdom to our own leaders, that they not be deceived by an enemy who has clearly spoken against us. Bond us forever in a godly way with Iraqis and Afghans that they will love our nation. · "Surely you shall call a nation you do not know, and nations who do not know you shall run to you, because of the Lord your God, and the Holy One of Israel; for He has glorified you." (Isaiah 55:5)
Posted by Capitol Hill Prayer Partners at 9:06 PM