• We rejoice for the Iraqi's that they are a sovereign nation. We pray that the withdrawal of allied troops from Iraq be only undertaken according to God's timetable -- not man's. May the people of Iraq realize the cost of their freedom and Who it comes from! And may they ask for wisdom for their new nation that can only come from above. • "He also taught me, and said to me: 'Let your heart retain my words; Keep my commands, and live. Get wisdom! Get understanding! Do not forget, nor turn away from the words of My mouth. Do not forsake her, and she will preserve you; love her, and she will keep you." (Proverbs 4: 4-7)

The Iraq Study Group's long-awaited report on a resolution for Iraq isn't coming out until Wednesday, but already has won support from those interested in an exit strategy and resistance from others who say certain recommendations will only harm U.S. and Iraqi interests. "I know there's a lot of speculation that these reports in Washington mean there's going to be some kind of graceful exit out of Iraq. We're going to stay in Iraq to get the job done, so long as the government wants us there," President Bush said Thursday, staking early ground in the debate. "The goal is a country that can defend, sustain, and govern itself. And therefore, to the extent that our troops are needed to help do that, we're willing to do that," Bush said from Amman, Jordan, where he answered reporters' questions alongside Iraqi Prime Minister Nouri al-Maliki.

• Oh Lord, we pray that America and her allies will confidently and gracefully leave Iraq with the most stable and honest government in the Middle East! We pray this for Your Glory, Amen. • "For the upright will dwell in the land, and the blameless will remain in it; but the wicked will be cut off from the earth, and the unfaithful will be uprooted from it." (Proverbs 2: 21-22 NKJV)

• God promises through His servant, David, that the wicked may oppress, but rejoicing will come through the Lord as He upholds the righteous! Offer praise that God promises to fight these battles for us, as we repent and trust in Him. • "Hear my voice, O God, in my meditation; preserve my life from fear of the enemy. Hide me from the secret plots of the wicked, from the rebellion of the workers of iniquity." (Psalm 64:1, 2)

4. Millions Without Power After Blizzard Rips Across Midwest; At Least 3 Dead - AP 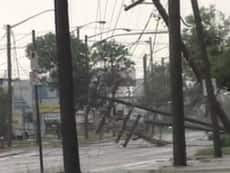 A deadly pre-winter blizzard that left nearly 2.4 million Midwest customers without power Friday swept quickly across the Great Lakes region, leaving up to two feet of snow and a massive cleanup operation to reopen major airports and clear highways clogged with abandoned vehicles.

• Dear Lord, we pray that You will please provide refuge from these wintry blasts for those who live in this extreme weather pattern. May we as a nation ask for and receive Your mercy from these storms! • "And there will be a tabernacle for shade in the daytime from the heat, for a place of refuge, and for a shelter from storm and rain." (Isaiah 4: 6 NKJV)

Super typhoon Durian has slammed into the eastern Philippines, spawning torrential rains and powerful winds that have blown away tin roofs and uprooted trees. Packing winds of 190 kilometres per hour, Durian tore through the eastern island of Catanduanes, about 410 kilometres east of Manila, before dawn, destroying property and tearing down power lines.

For nearly three hours Thursday afternoon, mudslides ripped through Mayon's gullies, uprooting trees, flattening houses and engulfing people. Entire hamlets were swamped in Mayon, on northern Luzon island. Some 198 people were killed - most in mudslides on Mayon - and 260 were missing, the national Office of Civil Defense reported. Another 130 were injured.

• Dear Lord, please spare the Phillippines from further disaster! May they remember that You are the one who has saved them from their oppressors and now stands ready to help with this typhoon, if they but ask! • "So I said, 'Oh, that I had wings like a dove! I would fly away and be at rest. Indeed, I would wander far off, and remain in the wilderness. I would hasten my escape from the windy storm and tempest. Cast your burden on the Lord, and He shall sustain you; He shall never permit the righteous to be moved." (Psalm 55: 6-8 & 22 NKJV) 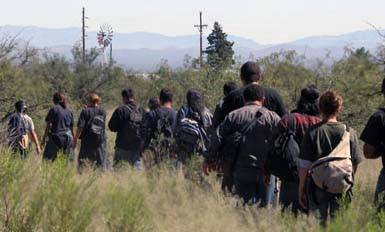 Half of the 91,516 illegal aliens from terror-sponsoring countries and those of "special interest" terror- sponsoring countries and those of "special interest" apprehended at the border between 2001 and 2005 were released into the U.S. population, according to a report by the inspector general's office of the Department of Homeland Security. The report, "Detention and Removal of Illegal Aliens," released earlier this year with little fanfare or attention, suggests about 85 percent of those aliens- potentially the most dangerous- would abscond and likely never be seen by authorities again. Acknowledging the danger such aliens pose to the national security, the report cites a DHS official testifying that terrorist organizations "believe illegal entry into the U.S. is more advantageous than legal entry for operations reasons."

• Pray with us for God's plan to be accomplished for these peoples: Their Salvation! • "For You have been a strength to the poor, a strength to the needy in his distress, a refuge from the storm, a shade from the heat; for the blast of the terrible ones is as a storm against the wall. You will reduce the noise of aliens, as heat in a dry place; as heat in the shadow of a cloud, the song of the terrible ones will be diminished. And He will destroy on this mountain the surface of the covering cast over all people, and the veil that is spread over all nations." (Isaiah 25: 5, 6 & 8 NKJV)

Posted by Capitol Hill Prayer Partners at 2:34 AM